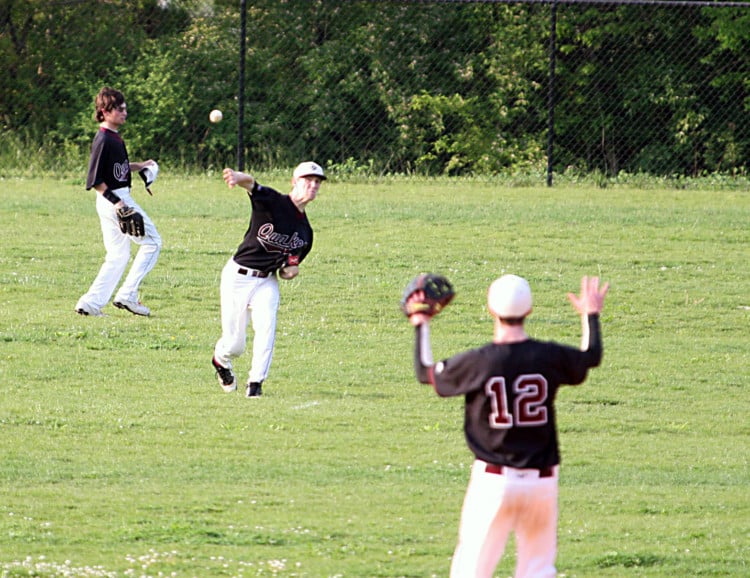 Not only are their several throwing options outfielders must consider when throwing into the cutoff man in the infield, there are skills which must be developed in all the players on the team: quick decision making, and the ability to make hard accurate throws. Then10 baseball cutoff drills represented here are designed to assist players in their decision making when there are one or two runners on base.

If there are two runners on base, the throw will most often go to the first baseman. The idea is to always make the throw go ahead of the runner. Outfielders never throw behind the runner. So, if there is a runner on first, the outfielder throws to the shortstop ahead of him.

Executing these plays to get runners out and make plays on a base or at home plate, throwing skills must be developed. Any and all throws are made with little body movement. A right-handed player takes a step forward with his right foot and makes the throw.

Outfielders should never throw to home unless there is no other choice. They use always throw to the cutoff man, who will signal hm by raising his arms high into the air, providing a large target to throw at.

Below are 10 different game situations involving a cutoff man in the infield. What is consistent in cutoff situations is that the infielder who acts as the cutoff and relay player is standing in a direct line between the outfielder and the base behind which is being protected.

In cutoff plays, most of the team gets involved, playing the role of backup, in anticipation of an over throw. In fact, in most outfield base hits with one or more runners on base, every player from the pitcher to the outfield players not fielding the base hit, are utilized to back up the throw, in the event it is thrown over its target.

This drill and all those that follow require the entire defense to be on the field. All 9 positions are filled. These are team drills which involve almost every player to play a role in the cutoff sequences.

With total team coverage on all the bases, the coach approaches the plate with a fungo bat. This drill is very similar to the one above, except the ball is hit to center field.

Much of the movement on the field goes into positions where they can field the ball in the event of an overthrow. Even though the primary players are the center fielder, shortstop and second baseman, three other players are engaged (4 players if the pitcher is included), to act as backup and to be in position to field the ball if it is overthrown.

Runner on First Base, Base hit to left Field

This drill involves the shortstop as the cutoff man, and the second and third baseman to cover the infield and to field the ball. The pitcher will also play a role acting as backup in the event of an overthrow behind the third baseman. The ball ends up at third base, in front of the runner.

Base hit to Center Field with a Runner on First Base

This is a similar fielder setup situation as above, when the ball was hit to left field. Again, the shortstop will be the cutoff man, and infield movement will be similar but with other fielders engaged to anticipate an over throw from the center fielder.

As soon as the ball is hit and drops into center field for a base hit, the defense is engaged. Players run towards their positions in the infield and outfield.

Single to Right Field with a Runner on First Base

Note that in each of these drills, there is a great deal of movement to anticipate overthrows. To accomplish this, players must form a straight line starting at the point where the ball is hit.

Around the Horn “Four Corners” Drill

Coaches should observe closely the accuracy of the throws in all these cutoff drills. Every throw each player involved in the cutoff play should be hard, fast and accurate. The idea is to never have an over throw although every play anticipates it as the defense engages to back up every throw.

Preventing runners from reaching an extra base can only be accomplished with fast and good throws to the cutoff man, followed by the other infielders involved in each play. The better the throws, the more control the defense has over the movement of the runners on base.

Players should always avoid running and throwing. Running before the throw wastes precious seconds when runners are on base. Players should take one step of the foot on the side of their throwing arm and throw with speed.

In this drill, the outfield is involved in high speed throwing to the second base and shortstop cutoff and relay positions in the infield. This drill covers the correct cutoff from right field to the shortstop as cutoff. Shortstop then relays to third.

Throwing drills involving both outfield and infield improves throwing skills and accuracy in longer throws. This drill pulls together outfield around the horn drills and infield throwing drills into one. Long throws are common in real game situations and long throw drills should be incorporated into every team practice.

Runner on Second Base, Base Hit to Left Field

In this drill, the third baseman this time is the cutoff man. The shortstop covers third base. In this situation, the baseball must stay ahead of the runner, who in this instance is heading to home.

Runner at Second Base, Base Hit to Center Field

The shortstop covers second base. The first baseman moves and positions himself between second base and home, as the cutoff man.  He will then turn and relay the throw to home plate.

This play involving the first baseman as the cutoff and relay man is scored 8-3-2.

Base hit to Right Field, Runner at Second Base

This cutoff drill assumes there is no runner at first base.

Runners at First and Second Base, Base hit to Center Field

The cutoff and relay man will be the first baseman. He will determine whether to cover first base or relay the throw to home plate.

Coaches should also create real game scenarios by positioning runners at first bae for some cutoff drills, then have runners at both first and second. Observe the decision making by your outfield. Call out directions to fielders, reminding them to throw to the cutoff man in the infield.