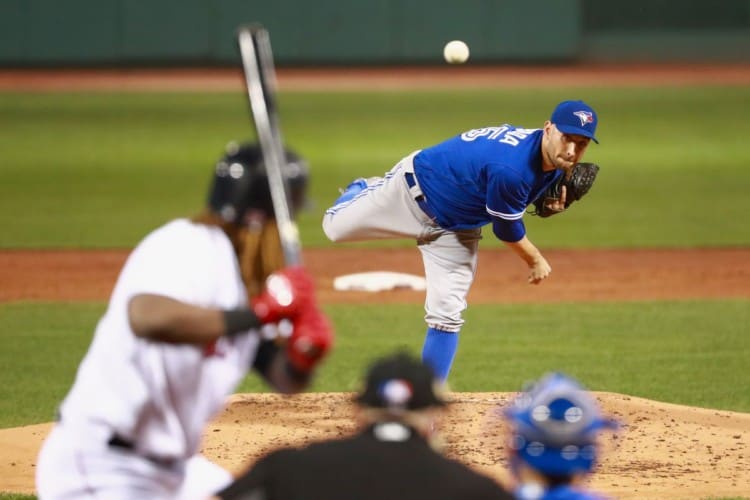 If you’ve ever watched a baseball game, you might realize that people talk about 4 seam versus 2 seam fastballs and want to know the difference. While both of those particular pitches in baseball travel at high rates of speed, unlike a curveball or slider, these two types of pitches have very different movement paths.

There are a few different reasons why a pitcher would prefer one over the other, but the differences are pretty critical when it comes down to pitch decisions at game time. The movements of a baseball rely on the seams as they travel through the air. Take a look at the picture below to get a good understanding of each fastballs movement as it crosses the plate. 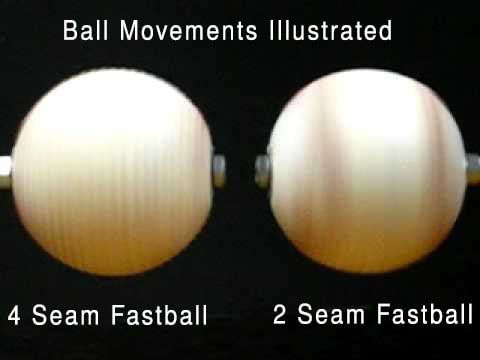 When to Throw a 4 Seam Fastball

When you’re behind in the count as a pitcher, it’s a good idea to focus on throwing a 4 seam fastball to the batter. This is important when you can’t afford to miss a strike without sacrificing a walk. A good example of this is when the pitcher is 2-0 or 3-1 in the count.

If you ever watch a Major League Baseball game carefully during these counts, you’ll probably notice that the pitcher has decided to throw a 4 seam fastball as compared to a 2 seam fastball or any other type of pitch.

The reason that this ball is so great to throw when you are behind in the count is because this type of pitch has absolutely no movement. The ball will travel in a directly straight line.

How to Grip a 4 Seam Fastball

The 4 Seam Fastball is probably one of the easiest pitches that you can throw. It has absolutely no movement on the ball (like a 2 seam fastball does). The 4 seam fastball is typically the first pitch that a young player will learn how to throw.

As mentioned before, the 4 seam fastball is a pitch thrown when throwing a strike is critical to the pitcher’s count. This is one of the fastest pitches that a pitcher can throw. 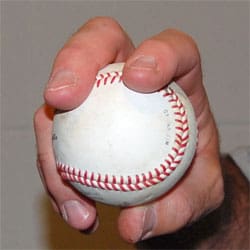 This type of pitch gets its name from the way that you hold the ball. The parallel seams across the baseball are held across 2 fingers under 2 seams lines.

To grip a 4 seam baseball, place your index finger and middle finger on the seam of the baseball as the picture demonstrates. This is typically regarded to as the horseshoe seam because when viewed from above, it resembles the horseshoe U-shape.

Your thumb should be directly underneath the baseball, not touching any of the seams below.

Not much more is needed to throw this type of pitch besides emphasizing strong backspin, so a looser grip will help maximize the whip off of your fingers. More whip will lead to a higher pitch speed.

When to Throw a 2 Seam Fastball

Knowing when to throw a 2 seam fastball compared to a 4 seam fastball is an important skill to harness. If you are behind in the count, it might not be wise to throw this type of pitch as it may “run away” from the strike zone.

If you practice the 2 seam fastball, you’ll know when to throw this type of pitch over a 4 seam. Learning to harness the power of your balls movement is going to be the first step to throwing a good 2 seam pitch. Proper pitching mechanics along with a strong familiarity with your pitching tendencies will lead to a successful 2 seam pitch.

Some of the hardest pitches to hit are when they are inside. If the batter connects with the ball on an inside pitch, it’s away from the barrel and won’t travel very far, giving the infield an easy out.

How to Grip a 2 Seam Fastball

Gripping a two seam fastball is not much different, besides where you hold the ball. There are no fancy flicks to get the ball to move like other types of breaking pitches.

This pitch is called the two seam fastball because your fingers are placed along the two seams of the ball. Simple enough, right? 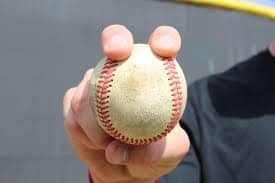 To grip the two seam fastball, place your index and middle finger along the 2 seams of the baseball. Put slightly more grip on your index finger when the pitch is thrown to help exaggerate the movement from the baseball.

The thumb should be in a comfortable position below the baseball, just like you would with a four seam grip.

For this pitch to be effective, you should note that the length of a person’s fingers can actually play a role in how much movement a 2 seam fastball can achieve.

Which Pitch Is More Important to Learn?

Whether you’re a little league player, or you’re a Major League Pitcher, the 4 seam pitch is going to be the most used in your arsenal. Without a doubt, you’ll need to use the 4 seam baseball pitch versus the 2 seam pitch more frequently.

However, there are exceptions. There are pitchers like R.A. Dickey who throw nothing but knuckleballs. This is their specialty, however, with most pitchers in the MLB, you’ll see plenty of 4 seam fastballs thrown.

This is because the four seam fastball is actually a must “safer” pitch to throw when compared to the two seam fastball. It is considered safer because there is no movement or breaking on the ball. It will be thrown in a straight line. These types of pitches are important to throw when a strike is critical.

How to Get More Movement on a 2 Seam Fastball

If you’re looking to add some extra movement to your 2 seam fastball, it’s a good idea to realize that a different approach will be had when compared to a 4 seam fastball. Because a 4 seam fastball has no movement, the pressure on each finger before the throw applied to the baseball will be equal.

If you want to apply more movement to your 2 seamer, try applying extra pressure to your index finger before your throw. It might feel odd at first, but give it a shot. You will notice that the ball will display more movement than before. Rather than going from side to side, you might begin to notice more of the vertical movement of the ball.