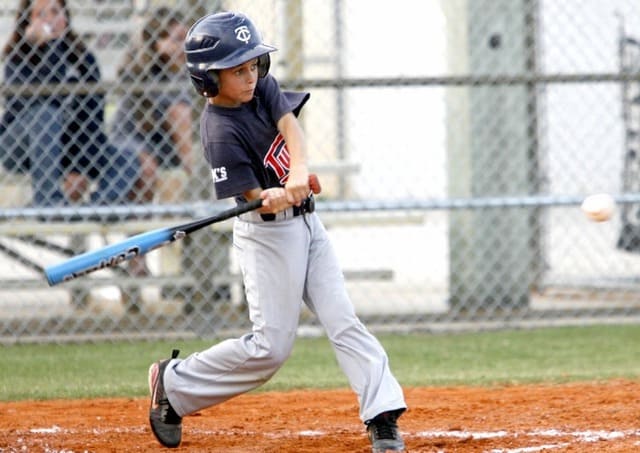 Choosing the best bat for a 10 year old can be challenging. There are so many manufacturers today making youth baseball bats, one would think it would be hard to get a consensus, and find a bat that is known for being exceptional and having qualities above and beyond the competition.

Yet today, there is a widely held consensus that exists to this day around the Re-Tooled DeMarini CF ZEN -10 Baseball Bat.  People who purchased this bat for their 10 year old baseball player are like-minded in their belief that this bat is unique and a great fit for their child.

The DeMarini CF ZEN baseball bat has an interesting history, and at one point was “outlawed” and prohibited from use in Little League by the United Sates Specialty Sports Association, or USSSA. It has since been removed from their list of banned bats and is now as legal to use as any other bat.

To get to understand why one bat design is superior to another, one needs to know the bat’s features as well as why a bat is designed the way it is. Young players using the bat, for example, appreciate the fact that the massive barrel of the DeMarini bat, at 2 ¾ inches in diameter, makes it much easier to make contact and hit the baseball.

The bat has the popular drop 10 weight to length ratio. Simply stated, this means that a bat 30 inches in length weighs 20 inches, a 31 inch length bat weighs 21 inches, and so on.

The DeMarini bat comes in three size lengths and weights: 30/20, 31/21, and 32/22. Depending on your child’s own size, weight and strength, one of these sizes has been designed to work for him. Note how the bat is 2 ½ feet long but weighs only about a pound and six ounces, an easy weight for a 10 year old to have complete control of his swing.

The handle of this bat has a feature called “D Fusion”. This is a new handle technology which serves the dual purpose of reducing sting in the hands when hitting the baseball, and transferring energy back to the bat’s barrel. This energy transfer means that hits will have more power on contact with the baseball.

The knob at the end of the DeMarini CF ZEN is made specifically for the smaller hands, strength and weight of 10, and 11 year old players.

Which is better: A One-Piece or Two-Piece Baseball Bat?

What is the Correct Size Baseball Bat for my Child?

The average ten-year old is approximately 54 inches tall (4 feet 6 inches), and weighs between 68 and 80 pounds. The method to sizing up your young ballplayer for a bat is as follows:

The Little League organization uses a chart with the player’s weight and the corresponding bat size for the weight.

Note that the DeMarini 2017 Re-Tooled CF ZEN 2 ¾ Drop 10 bat falls within the range recommended to the weight and height of most 10 year olds. This model ranges in size from 30 inches long and 20 ounces I weight, up to 32 inches long and weighing 22 ounces (1 pound, six ounces).

The Baseball Bat and Your Child’s Swing

It’s important to choose the right balance between length and weight of a bat because it will have an impact on the physical property of the swing.

If a 10-yer old player uses a bat that is long and light in weight, he will be able to swing it very fast, but it won’t have much inertia behind it.

Inertia is simply the resistance of any physical object to any change in its velocity. The physical object is the baseball bat, and the velocity is the speed of the swing of the bat. So when a child uses a long and light bat, he will swing fast and the bat won’t have much pull back at all in the swing.

On the other hand, if your child swings a short and heavy bat, the bat will have a lot of resistance against the power he puts into the swing inertia), and he will swing slower because of the resistance.

In the end, choosing between a lighter or heavier bat is an individual choice. If your child is strong enough to swing a heavier bat faster, you can decide on a short and heavy bat that is under 30 inches in length.

The results of calculations and scientific experimentation on pitch speed, bat weight and properties of inertia have drawn a conclusion. The data shows that a faster bat swing produces a faster batted ball speed.

In addition, if a batter were able to swing twice as fast, the swing speed of his bat increases by 22 miles per hour. The conclusion is that swinging a bat faster is more beneficial than swinging a heavier bat at the same speed. 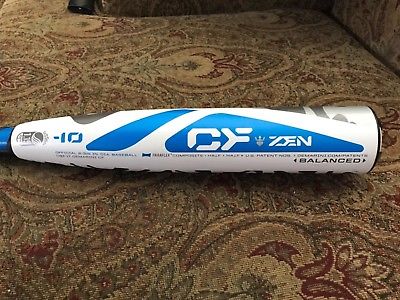 Based on the physical properties of weight and inertia, it’s best to buy the heaviest bat that still makes it easy for your 10 year old child to swing fast. The specifications for the DeMarini 2017 Re-Tooled CF ZEN 2 ¾ Drop 10 baseball bat seem to offer the perfect balance between the weight of the bat and the speed at which a 10 or 11 year old can swing the bat.

We mentioned earlier that the DeMarini composite bat is made of two pieces, which makes the player have more control of his hitting. Another advantage of the two piece design is its grip. This bottom part of the bat above the knob is lighter because it’s separate from the other half where the ball makes contact with the bat.

More control means a better and more accurate swing. Youth players are still working on their swing mechanics, their batting stance, how they approach the ball and finally, their swing through and hitting the baseball.

When a child gets to use the easiest bat to swing and can still hit for power, then he can perfect his body movements to make the most powerful and accurate contact with the pitched ball.

The other big feature of the DeMarini 2017 Re-Tooled CF ZEN 2 ¾ Drop 10 is its massive sweet spot. The thickest part of the barrel is 2 ¾ inches in diameter and this is the place where the bat comes into contact with the ball.

DeMarini talks about their bat’s “Paraflex plus composite construction.” Their claim is that this design feature provides for the most consistently responsive barrel than any they made before. The weight distribution on the bat was perfected for a lighter handle below the giant sweet spot.

In the end, the manufacturer states that their popular bat gives a light feel but packs a powerful wallop on the ball.

In 2017, the DeMarini CF ZEN baseball bat was sent to the United Sates Specialty Sports Association, or USSA, for certification and permission to be used in Little League Baseball.  After conducting a BPF test (Bat Performance Factor) on the bat, it was initially banned.

Bat Performance Factor, or BPF, is the increase in the liveliness of a baseball hitting a baseball bat, compared to throwing a ball against a solid wall. Simply put, BPF measures how fast the ball comes off the bat.

The USSSA performance standard for baseball bats is a BPF of 1.15. DeMarini’s initial CF ZEN bat had a higher BPF than 1.15, and was then banned from use.

Later that same year, DeMarini “re-tooled” the bat to comply with USSSA’s BPF requirement, and was then approved for Little League use. USSSA, as the governing body, seeks to level the playing field, as it were, so that no one product will give a player an unfair advantage over another.

How do I break in a Composite Baseball Bat?

Composite baseball and softball bats require a “break-in” period to reach their optimum in-game performance level. Unlike wood or aluminum alloy bats, composite materials need time to adjust before they can be used like any other baseball bat.

The reason composite bats need breaking in is to loosen the resin inside of the barrel so the material can be more responsive upon contact.

Composite bats are high-performance products and have a lifespan that is directly related to the number of impacts they receive. It’s recommended that once your bat has completed the break-in procedure outlined here that the bat be used for game play only. It can of course be used for practice outside of a regulation ball game, but using it exclusively for game play will help it last longer.

This break in procedure is designed to slowly break the bat it. Hitting composite bats at speeds faster than they are designed to withstand can cause premature cracking, resulting in damage to the bat before it reaches its full performance potential.

Breaking in a composite bat takes about an hour. Break in bats during practice and not before a game for it to function properly.

To break in the DeMarini CF ZEN baseball bat, it’s suggested you use a batting tee. Here are the steps to follow.

After these 300 hits, your composite bat will be broken-in and ready for game use. Keep in mind composite bat lifespans are directly related to how many impacts they receive, so if only used in ball games, it will last longer than using it for both practice and actual games.

Are There Other Things I Should Know about Caring for My Composite Bat?

Composite bats are made from materials designed to optimize hitting and provide the lightest weight possible without sacrificing power. The following is strongly recommended to keep your composite bat lasting a long time.

One of the great advantages of composite bats like the DeMarini 2017 Re-Tooled CF ZEN -10 Baseball Bat is that you don’t have to purchase several wood bats, or even own an aluminum bat, which are made in one piece and are generally more cumbersome for very young players to use.

However, if you do own a wood bat, it’s recommended your child use it when he or she practices at home. Not only does it help the composite bat last longer, but the difference in weight between a wooden bat and a composite bat is striking.

Learning to hit with a wooden bat will increase your child’s speed and accuracy with his composite bat. It will also give your player more control in his swing. With extra control comes the ability for players to work on their stance, stride and swing, as well as their hitting accuracy and avoiding strikeouts.

The DeMarini bat that was discussed here is one of the most popular bats for a ten year old to use, and is highly rated by users of the bat as well as the general bat manufacturing community.

DeMarini Sports, Inc. mostly manufactures baseball bats as well as other sports equipment. They are an American company located in Oregon, and are known for producing baseball bats that are innovative and provide enhanced hitting power.