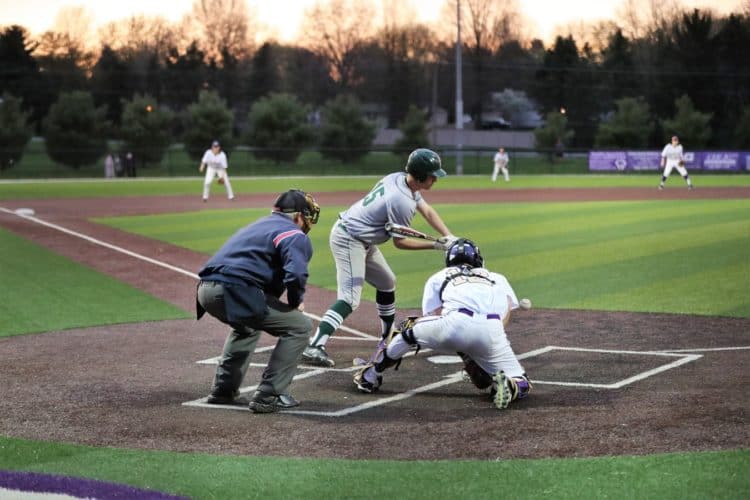 We assume every ball pitched to a batter will be thrown in the air. The batter watches the ball and determines if it is in or out of the strike zone. In a split second, he decides to either swing or pass. But sometimes a pitcher will make a mistake, and the ball will not travel  the full 60 feet to home plate. Instead, it bounces, so now the batter has to make a different decision: let the ball pass or swing at the ball.

Can a batter hit a pitch that bounces? A batter can hit a ball that bounces, as long as he remains inside the batter’s box. A ball that has bounced on the ground in front of home plate has lost much of its speed, and, like a cricket player, the hitter will swing at the ball, which can then travel far into the outfield. Baseball becomes cricket for a split second as the batter makes contact with the baseball.

There have been some really exciting plays when the pitcher throws a bouncing ball to a hitter. Videos are online that depict players making a split-second reaction and hammering the ball for extra-base hits.

There are other times when the batter is not aware the ball has bounced. The ball hits the dirt, the batter swings and the ball is in the path of his swing. The batter has already decided to swing at the ball before it bounced, and by serendipity, the ball is there, waiting for the wood of the bat to slam at it.

Why Does The Pitcher Throw A Ball That Bounces?

One of the reasons a pitcher will throw a bouncing ball intentionally is that he wants the umpire to give him a new baseball. He may not like using the ball he’s using, and often the only way to remove that ball is to throw it in the dirt. Umpires don’t always exchange baseballs when the pitcher asks for a new ball.

When the pitcher throws in the dirt, the catcher retrieves it and automatically gives it to the umpire. The umpire will usually replace the ball since it has made contact with the ground.

Now we enter into a darker aspect of baseball when the pitcher’s team is behind in the game and a batter comes up who has hit well in the game. The pitcher will throw the ball to hit the batter, and in the process, loses control of the ball, causing it to bounce. 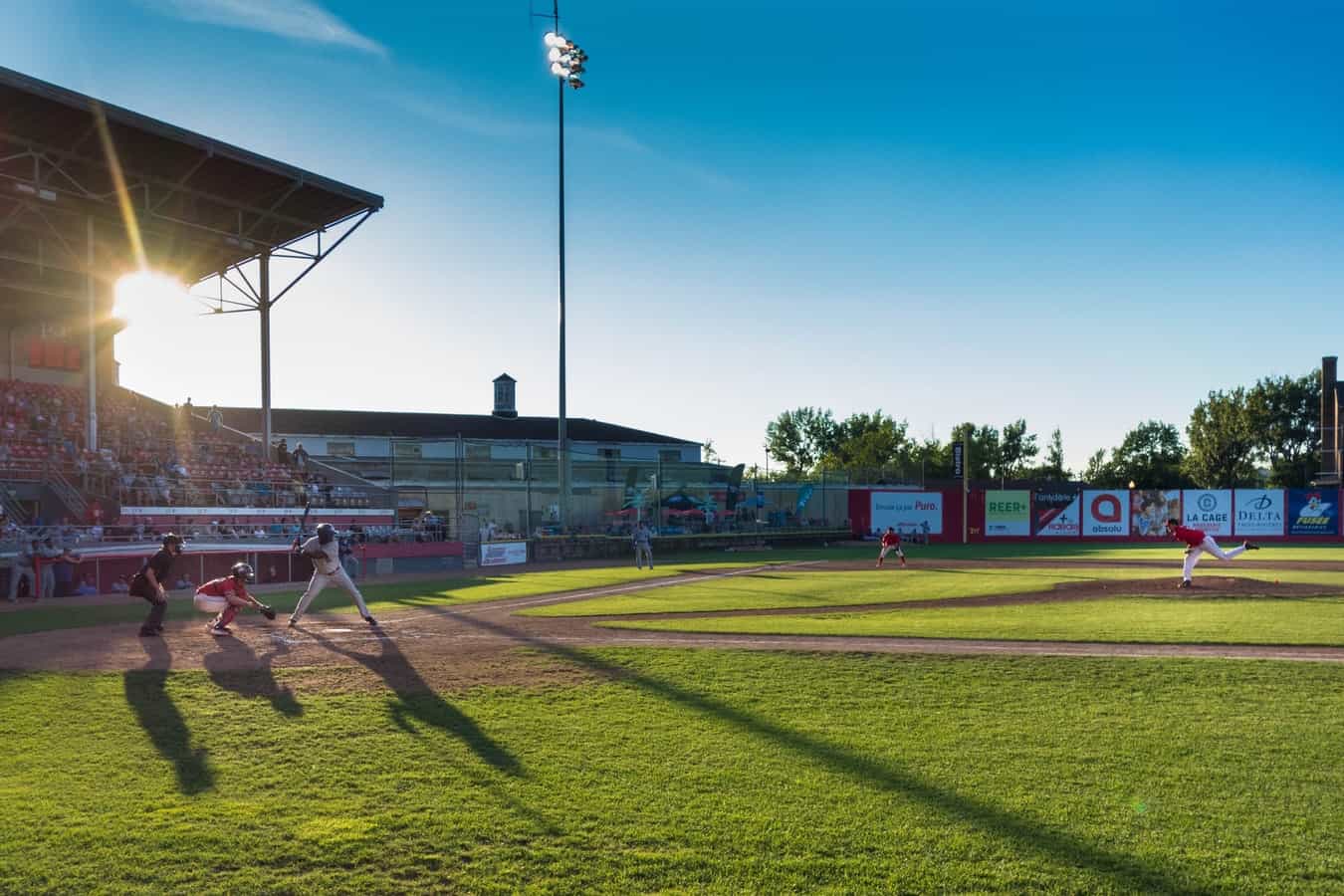 The pitcher knows full well that if he hits a batter, then the batter is awarded first base automatically. There may be other reasons for the pitcher to throw directly at a batter; often a batter and pitcher will dislike each other, or the players exchange words, angering the pitcher; his recourse is to hit the batter with the ball.

What Are The Dangers Of Getting Hit By A Pitch?

A batter being hit by a pitch is still very common, even as Major League Baseball has begun leaning towards player safety. The baseball scorebook abbreviates a batter being hit with a baseball as “hit by pitch” or “HBP”.

Baseballs are thrown at speeds that exceed 95 miles an hour. A baseball is hard, not soft like a softball is. The inner core of the ball is made from a rubber-coated cork surrounded by wool and cotton yarn. The core is what makes the ball hard, and the faster it travels in the air, the more potent its force.

In the 1920 baseball season, Ray Chapman, playing for the Cleveland Indians, was struck on the head by Carl Mays. The next morning, Chapman died of internal bleeding caused by a skull fracture.

In 2015, over 2900 hit by pitch injuries occurred in the major leagues, resulting in over 24,000 days missed by hitters who were struck by a pitcher intentionally throwing the ball directly at the batter.

There have been severe injuries as a result of being hit by a pitch. In 1967, Red Sox hitter Tony Conigliaro was struck by a high-speed pitch thrown by California Angels pitcher Jack Hamilton. The ball barely missed his left eye, yet Conigliaro’s cheek shattered; he nearly lost sight in the eye and had to sit out the 1968 season because he was unable to play. Unfortunately, he never regained his former hitting ability after the injury.

In 1995, at the end of the season, Kirby Puckett of the Minnesota Twins was hit on the cheek by Denis Martinez. The impact broke Puckett’s jaw and loosened his teeth. The next year, Puckett developed glaucoma, and the cause was linked to his being hit by Martinez’s pitch. Puckett was forced to retire.

Some fans believe that a pitcher in the act of hitting a player on purpose should be arrested and charged with assault. Batters being hit by pitches is a growing problem through 2019. It occurs more and more often and has become part of a winning strategy for some teams.

Pitchers will look into their dugout when on the mound to get signals from the manager or the pitching coach about how to handle some hitters on the opposing team. The manager may give a signal for the pitcher to intentionally hit the batter, and the pitcher will usually comply with the manager’s order.

Rules for Little League are somewhat different from rules for Major League Baseball. The distance between bases is shorter in Little League; there are only 6 innings of play instead of nine; the distance to the outfield fence is no more than 250 feet, compared to the 400 feet and over in the majors.

However, a ball that the pitcher throws that bounces in front of the batter is still in play. Little League has determined, like the major leagues, that the ball is not in foul territory’ although the ball bounces, it can still be hit and put in play by the batter.

According to the rules, there is not a predetermined way for a baseball to reach the batter. Nowhere in either Little League or the major leagues does it specify that a pitched ball must always be airborne when it is thrown.

When there are runners in scoring position in professional baseball, a bounced ball that is hit so far in the outfield that runners on base will score, pitchers will become infuriated and complain to the umpire that the ball bounced first and therefore is in foul play. But the umpire will rule that the ball was in play and therefore was fair game for the batter to take a swing at.

Other pitches like foul tips are acceptable, so it would seem difficult for a pitcher to win such an argument. Pitchers already have several advantages over a batter, such as the fact that he is throwing from a mound of dirt that is raised above the batter, giving him a somewhat greater advantage over the control of the ball.

What Other Strange Rules Were Part of Baseball?

Home plate umpires today have the toughest job on the field. They remain in a crouched position for 9 full innings of each game, and it must get uncomfortable after a while. Also, they have to call balls and strikes on pitches storage over 90 miles per hour. It is still not clear if the human eye can track a pitch and declare it to be in the strike zone at that speed.

But in the 1890s, umpires had a better time of regulating baseball games. Umpires were chosen by fans before each game, and instead of standing awkwardly behind the catcher, they were given easy chairs to sit in that were situated near home plate, where they weren’t likely to be hit by the pitch.

Baseball speeds until 1883 were much slower than they are now. Before that year, pitchers were required to throw underhand, slowing down the ball greatly and making baseball a hitter’s game.

For 20 years, batters had the right to request balls to be pitched high or low in the strike zone, depending on their preference. Such a rule today is laughed at since the element of surprise is what makes the game so great. No one but the catcher (and sometimes the manager) knows what pitches will be thrown to the batter.

Pitchers today have an arsenal of hard to hit throws at their disposal. Today there is the fastball, the curveball, the change up and the slider, and variations of these 4 pitches. Pitchers have evolved as well as medical procedures to treat their arms. Doctors have won the argument about the fragility of the human arm and the strain caused by throwing overhead pitches. Most starting pitchers today will never throw more than 100 itches in any game, and some will stop at 90, depending on which team they play for.