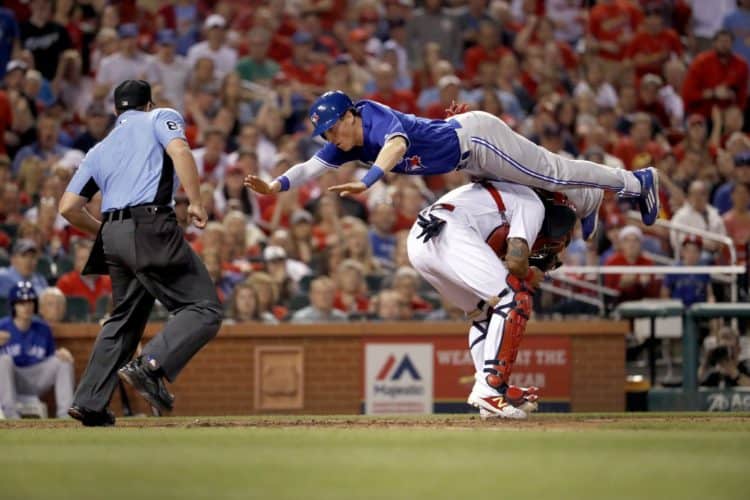 Home plate is one of the most dangerous areas of play on the field.  Players who run home from 3rd base to home do not have a clear path to the plate. In front of him is the bulk of the catcher, wearing heavy protective equipment and intent on making sure the runner doesn’t score. The catcher waits, and there will likely be a collision of bodies, a powerful clash that often causes injury. But there is one way to avoid a dangerous collision.

Can you jump over the catcher in baseball? Yes, a runner from 3rd base is allowed to jump over the catcher as long as he remains in the baseline. These types of plays are exciting to watch, and the runner is often successful in scoring a run when he makes a perfect jump. It is a safer move, than colliding with the catcher, for both players. No rule requires the runner to slide into home in the Major League Baseball rule book, nor is there a rule against jumping over the catcher to score. However, there is more to the story than this.

Are Players In Every League Allowed To Jump Over The Catcher?

There are well over 100 baseball organizations in the country, from the well-known Little League organization to the lesser-known All-League baseball; both leagues serve youth league play, younger students up (and at) the high school level.

Other rules include the size of the baseball bat, the length of the game (6 innings in Little League, 9 in pro ball). In Little League, if a pitcher throws 3 innings, he qualifies for winning pitcher status, while in pro ball a pitcher must throw at least 5 complete innings for the win or loss.

Little League does not allow designated hitters, but the American League always has a DH in the lineup. The pitcher’s rubber is a different size in youth ball than the majors, as are the sizes of the bases.

High School baseball usually begins when Little League ends, although the league does have divisions for players of high school age. However, in high school baseball, you are not allowed to run over the catcher. The catcher stands there in front of the runner blocking the bag. The runner’s only option is to go around the catcher. A collision with the catcher is an automatic out. Besides, the runner can be ejected from the game.

It can be easily seen that baseball outside the minor and major leagues is about safety. Unlike the pros, it’s not a contact sport. Safety is also in mind when stealing bases. In the majors, a runner can slide headfirst into the base when he’s attempting to steal; in Little League running headfirst is prohibited, but some high school leagues permit it. 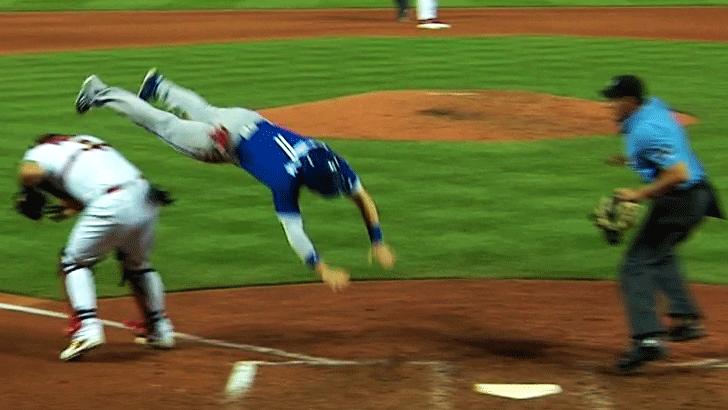 “Contact sports” are those sports in which there is physical contact between players as an accepted part of the game. This means that tennis is not a contact sport, because players remain separated by a net and never touch. If players did make contact, it would be illegal and the player making such contact may forfeit the game for his action.

American baseball closely resembles English cricket, yet cricket is considered a non-contact sport. Players can only be injured should the ball hit them, or they trip and cause ankle and leg injuries.

When a runner finds himself in a double play situation, his target is not reaching and touching second base; rather, his focus is on the fielder guarding the base.  He does this to interfere with the player’s throw to first base so that the double play attempt fails. The runner tries to slide into the infield player with his feet or hands to cause the player to fumble his throw to first base.

Outfield players routinely collide into each other in the zone between left and center field, or between center and right field. Collisions also occur between infield and outfield players, even when one of the players signals that he will catch the ball Bright sunlight, and the loudness of the fans in the stadium causes players not to hear the fair catch yells that other players make.

Baseball is not as physical as football, of course. Football is the most extreme American contact sport. Hockey is also an intensely physical contact sport, where players legally try to gain an advantage over power plays by checking opposing players against the Plexiglas that surround the rink.

Water polo and basketball are also considered contact sports. Of course, the most intensely physically grueling sport is boxing. “Winning” a boxing match occurs when a boxer physically breaks down his opponent by punching him in the face and body until the opponent is too weak to fight or gets knocked unconscious.

The most popular sports are those that involve contact with the opponent. Football stadiums fill up with anywhere from 60,000 to over 90,000 screaming fans.

Baseball, also a contact sport, is big business too with a lot of money on the line. It would not attract 50,000 or more fans to each game if it were a more delicately played game. Fans at the stadium or watching on television want to see feats of physical prowess, as when a shortstop jumps in the air to catch a high fly ball for an out, or incredibly efficient double plays where players perform amazing feats of strength and complete the challenging play.

When we watch a runner jumping over a catcher’s bulk and reach home plate and called safe by the umpire, we applaud his acrobatic ability as something almost superhuman.

Why Does A Runner Jump Over A Catcher To Score?

We need to return to the rulebook of Major League Baseball. Prior to 2014, runners were allowed to make hard physical contact with the catcher in their attempt to force the catcher to drop the baseball, allowing the runner to score. To prevent injury, the rules of the game changed.

In the judgment of the umpire, if the runner attempts to score by initiating contact with the catcher, or any other player at home plate, such as the first baseman or the pitcher, the umpire will call the runner out automatically. It is ruled an out even if the catcher loses possession of the ball after the collision.

The safer alternative is for the runner to jump over the catcher. This is accomplished often without any contact, and for this to work, the player must have excellent gymnastic skills.

As the runner approaches the catcher, just before the catcher’s mitt comes into contact with his body, he performs a running front flip, first planting his hands on the ground and flipping over the catcher’s body entirely.

As long as the runner stays in the baseline and doesn’t go into foul territory, he can flip his body over the catcher. But he must touch home plate either with a hand or a foot to score.

Some jumps are more physical, and it is the umpire’s discretion to call the runner out or safe. For example, a runner may not flip over the catcher high enough, then his legs ram into the catcher’s head. Often the umpire will call this an out. However, before 2014, this was considered within the rules of baseball. Catchers would sustain neck and spinal cord injuries from this kind of contact.

Jumping over the catcher is much more exciting, and safer, than body to body contact. On the other hand, only some players have the gymnastic ability to jump over a man who is 6 feet tall or over.

The only option for many runners from third is to run toward home and extend their hand as far as they can toward home without colliding into the catcher. Since the running flip is so much more effective than sliding into home, players are now learning gymnastics so that they can jump over the catcher. We expect to see more physical feats from players as baseball focuses more on player safety.