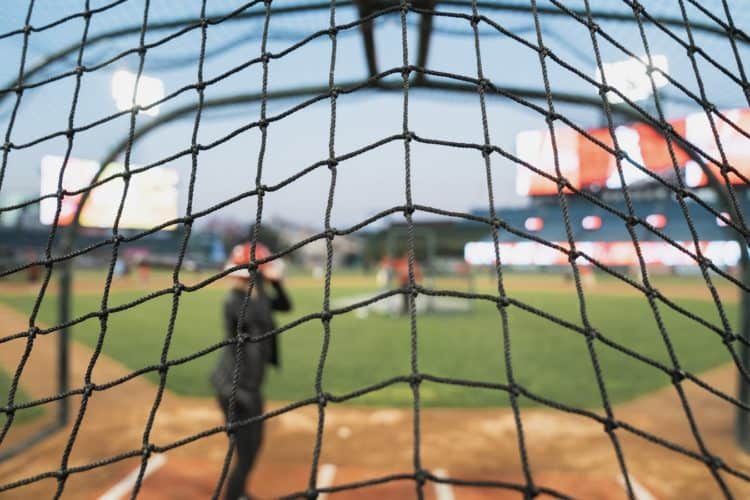 Most baseball players don’t have degrees in physics, nor have they studied how an object moves in space, or how fast moves over a specific distance, in this case, exactly 60 feet and 6 inches. Baseball hitting and pitching is all about instinct, and the gift for being able to predict how an object will move. A batter has less than half a second to determine if he should let pass, or take a swing at, a 95-mile per hour fastball coming towards him. It does not seem possible he could swing at the ball twice in that half-second of time, but it has happened.

Can you swing twice at one pitch? The answer is yes and it happens when the bat is broken upon contact with the ball. Famously, this occurred in Game 7 of the National League Championship Series between the San Francisco Giants and the St. Louis Cardinals. In the bottom of the 3rd inning with the bases loaded, Hunter Pence broke his bat while swinging and the bat made contact with the baseball not once, not twice, but a total of three times. All three base runners scored, blowing the game wide open for the Giants.

People often wonder if it is humanly possible to hit a baseball twice in one pitch without a broken bat. A Bugs Bunny cartoon from the 1940s shows Bugs Bunny pitching a “perplexing slowball” to batters, striking out each batter in a row as they swing the bat three times in each pitch.

In a real game situation, the answer is that it isn’t possible to swing at a pitch twice. It is believed it takes the eye a little over half a second to determine that a moving object is headed towards them. Baseball players, through talent, discipline and a lot of practice, can make a snap judgment about where the baseball is headed and decide whether to swing or not swing at it. The ball itself takes less than half a second to reach the plate.

There have been a small number of broken bat home runs in baseball. In 2019, Yandy Diaz of the Tampa Bay Devil Rays cracked his bat but had enough power behind his swing to carry the ball over the left field fence for a two-run homer.

At the beginning of the 2018 season, Bryce Harper of the Washington Nationals hit a home run playing against the New York Yankees as his bat broke in two. The last image on the screen at the plate was Harper holding only the remaining knob of the bat in his grip as he watched the ball soar over 400 feet over the right field fence. The rest of the bat was like a projectile, flying over 100 feet into foul territory.

How Hard Is It To Hit A Baseball In The Major Leagues?

Imagine you are standing at home plate and Randy Johnson is on the pitcher’s mound. You grip the bat and remain in your stance, waiting for the pitch. When Johnson releases the ball, you will begin your forward stride and prepare to swing.

Johnson releases the baseball, but by the time you even move a muscle to get into your stride, you hear the loud smack of the ball crack the leather inside the catcher’s glove.

Anyone who doesn’t play in the major leagues will find it difficult, if not impossible, to hit a pitch coming at them at 95 to 100 miles per hour. The ball is released and into the catcher’s mitt in less than half a second. Specifically, the ball travels 60 feet and 6 inches from the pitcher’s mound to the plate in 400 milliseconds, about the same amount of time it takes to blink your eyes.

The hitter identifies the baseball in about 100 milliseconds or a tenth of a second. Then, he only has three-tenths of a second to react. Part of that remaining time, the batter must decide if the ball is in or out of the strike zone, if it’s high or low, close inside or if it’s an outside pitch.

The remaining 150 milliseconds he has left is spent deciding to swing or not to swing. If the batter swings at the ball, he must crack the bat from being inert and stationary to a full, fast swing around his body.

It almost seems like an impossible feat. Hitters see an average of 5 to 7 pitches every time they are at-bat. If a batter comes to the plate 4 times in a game, he can see up to 28 pitches in a game. If he’s a starting player, he sees somewhere over 4500 pitches in a season.

A batter who sustains a .300 batting average throughout the season has hit an average of 3 times for every 10 at-bats, which is phenomenal considering the reaction time he must have to make contact with the baseball over and over. Not only has the hitter made contact with the ball, but he has hit it for single or multiple bases.

The brain inside the batter’s head must act as a camera works, taking hundreds of still images of the ball every pitch. It defies logic that anyone can hit a baseball that is careening through the air at 100 feet per second, yet over 100 years of professional play proves that it can be done.

Which Hitters In Baseball Have The Highest Batting Averages?

The undisputed leader in batting average in baseball remains Ty Cobb of the Detroit Tigers. Cobb played for 24 seasons and posted an astounding .367 batting average over 24 seasons. Even when we take pitch speed, fast running, and a little cheating into account, Cobb’s batting average is still something to be amazed by. Besides, no other player except for Rogers Hornsby (.353 career average), and one more in modern times, came close to this hitting percentage.

In his 24 years, Cobb struck out only 680 times in over 11,000 at-bats. If Cobb played modern baseball, where the pitches are thrown at supersonic speed compared to the early 1900s, chances are he would still retain a lifetime average over .330.

Today, when baseball is more challenging to play than it was 100 years ago, players still record incredibly high batting statistics. Here is a list of present-day hitters who have found the way to hit a baseball pitched at lightning speed.

In his 20 years of playing baseball, Gwynn, like Chipper Jones, played for only one team; it was the San Diego Padres. His career spanned from 1982 to 2001. Starting in his second year, Gwynn’s average remained well over .300 for the next 19 years. In a bad year, his average “sunk” to .309.

But his most amazing year as a hitter was in 1994, when his batting average topped both divisions of the Major Leagues with a stupefying .394 average, based on 475 at-bats. Also, his on-base percentage led the majors that year with .480. For 8 years of his career, he had the highest batting average in the National League. His average never dropped below .350 for the next five years consecutively.

It’s hard to imagine how someone could hit the ball for a base hit 4 times out of 10, on average, game after game, one at bat after the other. Yet Tony Gwynn was able to maintain this insurmountable batting average over the 6-month season.

How Did Tony Gwynn Do It?

People have theorized how Gwynn was able to hit better than any of his contemporaries. Some theories claim that it was due to the better weather he benefited from in San Diego. However, only half of the 162 games the Padres played were home games.

More accurately and closer to the truth, Tony Gwynn sustained such a high batting average with immense talent by birth, and by the use of modern video reply technology.  Teammates claimed that when Gwynn got base hits, he didn’t bother to study it on the replay tapes players. Instead, he’d only watch when he got an out on a grounder or a fly ball.

However, this still doesn’t explain how his average was so much higher than his contemporaries year after year. Gwynn must have had a higher “baseball IQ,” an understanding of pitching mechanics that he could easily understand, and, finally, his gut determination that made him practice his swing and his reaction time over and over again.