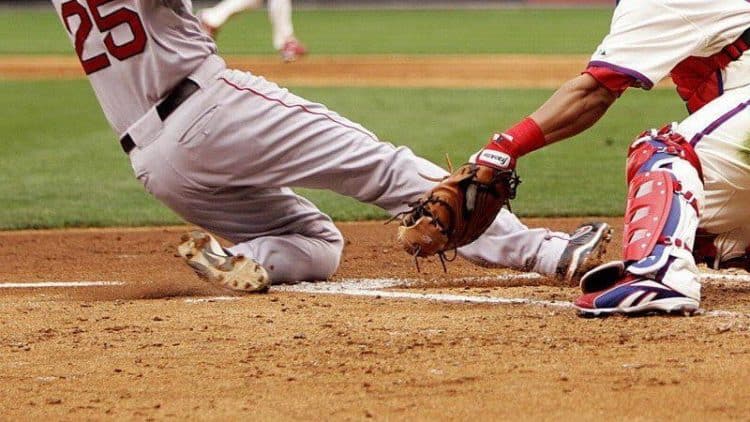 The baseball season was coming upon our family and my son’s feet no longer fit into last year’s baseball cleats, and I groaned at the thought of going to the store and laying down some serious cash for a new pair of baseball cleats. He had grown out of the last pair and was in 10th grade. Then I remembered that my son, 2 years older, had played soccer last year. His feet were bigger, and he wasn’t using his soccer cleats anymore. I did a little research into the differences in soccer cleats and baseball cleats, asking myself if my son could wear soccer cleats for his baseball season. He tried them on, and they fit perfectly. He even liked them!

In my research, I found out what a soccer and baseball cleats have in common, and how they differ. Also, I realized that my son’s foot wasn’t a perfect fit in his older brother’s soccer cleats, but I reasoned he could get away with it. But I still wasn’t convinced. I checked into it further.

The main difference between soccer and baseball cleats is the cleat pattern underneath. This is the part of the shoe that will help kids move in parallel and backward and forward motion in both sports.

Below is an illustration of typical soccer cleats: 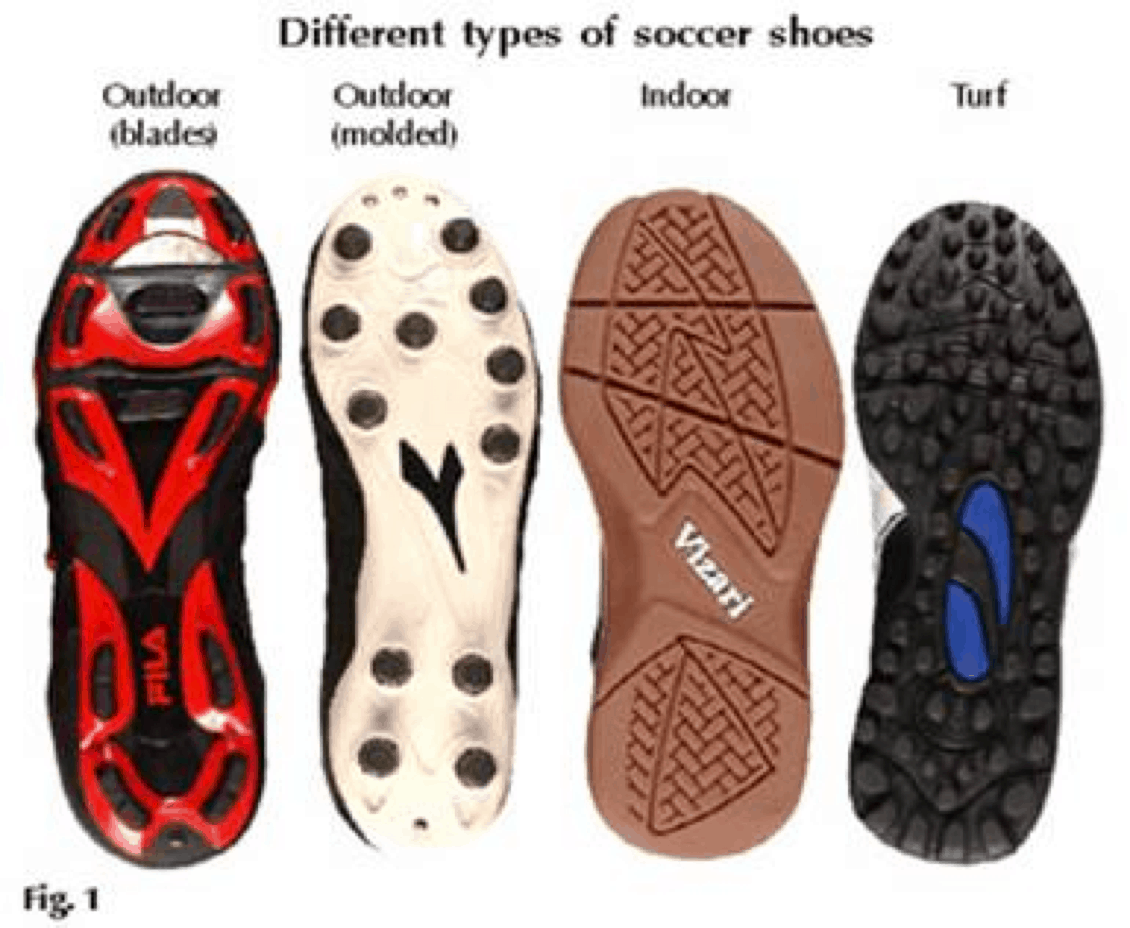 Now here’s a comparison between soccer cleats and baseball cleats:

On the baseball cleat on the left, it’s easy to see the front cleat, which is also used in football, while the soccer cleat on the right has a center cleat situated under the balls of the feet.

The conclusion I came to was that a kid could wear soccer cleats in baseball, but baseball cleats could not be worn for soccer for safety reasons. I thought I was done and figured that my son could wear his brother’s soccer cleats, but after reading a few more articles it was clear that the answer was more complicated than that. In the end, I reversed my decision about letting him use soccer cleats.

Soccer involves a lot of running around the field that is steady and ongoing. During gameplay, soccer players generally run at a steady speed but will make sharp moves laterally (to the right and the left), and when they have the ball they kick it forward or to another player on either side. Soccer involves regular, constant movement.

Baseball, however, is a game of “fits and starts.” At one moment a player is stationary and the next he is running at full speed. When a player starts to run, his feet grip the dirt and he takes off.

Baseball players are performing one of three different activities in the course of a game:

In each of these moves, the shortstop uses that front cleat found on baseball cleats to spring into action. In the outfield, when a fielder throws the baseball a long distance either to the infield or to home, he steps off his front cleat to make the throw.

I reasoned that the differences in gameplay between soccer and baseball are certainly a factor when deciding which cleat my son should wear.

At this point, I concluded that it might be a good idea to see if the soccer cleats would work for my baseball playing son.

Are there other Differences between Baseball and Soccer Cleats?

It’s important to keep in mind that my son is in 10th grade and plays junior varsity high school baseball. In the end, this fact led me to make a final decision. I asked my son to find the pair of baseball cleats that felt best to him within our buying range. I paid and we left the store with his new pair of baseball cleats.

What are the Factors that can Help Parents decide if their child can wear Soccer Cleats for Baseball?

In the end, I decided not to give my son the perfectly good fitting soccer cleats his older brother wasn’t going to use. The decision was based on the fact that my son plays competitive baseball in high school.

High school baseball is much faster and competitive than Little League baseball. Not only that, my son is a pretty decent player and is one of the fastest base runners on the team. That front cleat would be important to have under his shoe. Not only that, but he’s looking to make the varsity squad in 11th grade, and his performance now will definitely get him closer to making the cut.

I had coached Little League for about 5 years, and I remembered how much fun it was. The base paths were only 60 feet apart instead of the regulation 90 feet. The emphasis wasn’t so much on competition as it was having a good time.

It was also an important period in my players’ career to learn the fundamentals of running, hitting and fielding. Most of practice time was spent having the players perform drills, then over to the hitting tee to practice their swing. I spent time with each one, getting them to improve their body mechanics and follow through to the baseball.

They weren’t relying on the front cleat as much, and a lot of the players were using their soccer cleats, which were lighter and more versatile. It didn’t really have much of an impact. In fact, players on opposing teams also wore soccer cleats, so in the end, neither team had the edge over the other when it came to cleats.

The level of play was what made me ultimately decide to get my son baseball cleats. He’d need every advantage he could get to compete at that higher, more competitive level of play.

Are There Other Differences between Baseball and Soccer Cleats Besides the Front Cleat?

Yes. Aside from the front cleat which is used for jumping off of from a stationary position, there is the difference in weight as mentioned earlier.

There is also a difference in ankle support. Each child has different requirements for support of their ankles. For some, the more support they have at their ankles, the less chance of them having an injury from the ankle flexing when a player changes position rapidly.

Baseball cleats also come in low, mid and high top models. Some players can use the mid and high top and not have their play impeded. This is because, unlike soccer, baseball players aren’t running all the time.

In addition, baseball players can sustain more ankle injuries than soccer players due to the fact that baseball players react in a split second and pounce from one position to the other in a split second, while in soccer, movement is continuous most of the time. The mid and high tops will prevent injury yet not impede a player’s ability to perform at his highest level.

Baseball players stand in place very often in the course of a game. Fielders watch their pitcher taking signals from the catcher then make a pitch. As they watch, they get into a ready position. If the batter doesn’t sing, they stand again and wait while the pitcher again communicates with the catcher.

When the batter hits the ball, it will go toward one of the infielders, or to left, center or right field. Remaining stationary can cause pain and fatigue in feet, and it’s common to see players shifting their weight from one foot to the other to alleviate their foot pain.

If you have a child who feels greater discomfort in his feet for one reason or the other, you may want to consider purchasing baseball cleats for him or her, even if they are playing Little League baseball.

What should I look for in Cleats That will be Used for both Soccer and Baseball?

Textiles and synthetic materials are now used in the construction of most soccer shoes. They are much more lightweight and highly durable and designed to last longer than older, mesh material or vinyl soccer cleats of yesteryear.

It’s easy to see the difference by just lifting up a new pair of soccer cleats from any of the major manufacturers. The lighter weight of the newer shoes allows soccer players to run faster and move laterally much easier with less chance of injury from the cleats.

If you choose to exchange your child’s soccer cleats for baseball cleats, try to purchase soccer shoes that have neutral colors.  Boys and girls can share cleats that are black, grey or blue in color.  Keep in mind, though, that you will not be able to use baseball cleats for soccer.

If your neighbors also have their children playing soccer and baseball, you can begin an exchange system with them where you hand down soccer cleats to each other.

Cleats can become an expensive investment especially if you have 2 or more children playing sports. The child will grow out of his cleats at the end of the year, so exchanges with neighbors and buying soccer cleats with neutral colors are great ways to save money.

What are the different types of Baseball Cleats?

Baseball cleats are made with either genuine or synthetic leather. Genuine leather is more breathable and will tend to last longer than synthetic materials. Keep in mind that if you invest more into leather baseball cleats, you can hand them down to your younger ballplayers.

There’s an old adage which says, “You get what you pay for.” This holds true today, no matter what you buy. I tried the cheaper route with regular walking shoes. Over time the ones that were inexpensive and made of cheaper material will wear out much faster than a better-made shoe. I ended up having to buy three pair of shoes compared to one pair of quality shoes and ended up paying more in the end!

It’s a good idea to buy quality baseball and soccer shoes that you can hand down and you’ll save money in the end.

On the other hand, molded plastic can be used on any type of surface and won’t slow down runners. The metal cleats, which are more expensive, will give the best grip, but the less expensive plastic cleats will last longer. The final decision between metal and plastic is the level at which your child plays.

If he or she is playing competitively at the high school level, it’s best to purchase metal cleats. Younger players who play less competitively can wear molded plastic cleats and will still be able to play at a competitive level.

Thanks to modern research into using synthetic materials for soccer cleats, they’ve become more durable and longer lasting. Cleats are also much more lightweight than before and can be handed down to younger baseball players. However, in more competitive baseball, it’s recommended for parents to invest in good quality baseball cleats, preferably with metal cleats for older baseball players who play competitively.