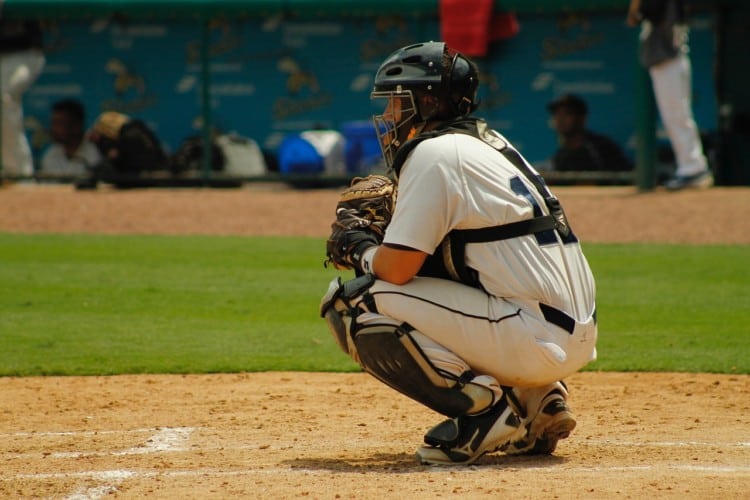 The longer pitchers, fielders and catchers play the game of baseball, the more competitive it becomes. Having quick reflexes and throwing accurately are key to being a good or even great catcher. Increasing agility while wearing up to ten pounds the extra weight from helmets, chest protectors and leg guards can be achieved by performing catcher drills that can be done alone either outside or in the home.

The catching position on a team is one of the most challenging and takes a great deal of preparation to do the best work possible. Good catchers call the game, throw out runners, block pitched balls, and understand the psychology of baseball in ways their teammates don’t.

An outfielder has to be able to catch fly balls in the wind and rain, and when they’re high in the air and be able to follow the ball’s trajectory. But a catcher has a central view of all the action, and must react to every play on the field when there are runners on base. Strength and endurance are key to being a superior catcher.

Here’s some catcher drills you can do by yourself. They are designed to increase strength, endurance, throwing ability and reflexes.

There are three basic stances for catchers which they assume at different times in a game. Most catcher drills should be performed in one of these stances. Always remember not to squat on the balls of your feet when in these stances.

In the primary stance, set a timer to one minute, and press your back against the wall and maintain a seated position. Try to hold this position for the full minute, and over time, increase the length to 2 minutes, then three, five, etc.

This drill helps build endurance in the primary and secondary stance. Maintaining pressure on the wall for a few minutes makes the squat feel more natural. You can listen to music or watch television while performing the back press drill.

Often it’s good to have distractions when doing endurance drills. Turn on the TV and assume a squatting position. Make sure your entire foot is flat to the ground. Time yourself and work up to being able to remain flat footed until a TV commercial break, when you can either stand or rest on your heel or the balls or your foot.

Squatting with flat feet in a game gives more balance than just heels or the front of the foot, though some catchers prefer not to be flat footed during play. Whichever you choose, it’s a great endurance test and a position you can assume between batters or when there’s a time out on the field. The more ways a catcher can balance in his stance, the less strain and fatigue there’ll be during a game.

This drill is important to develop balance in your stance when pitches come in on the inside and outside of the plate. Press the feet flat to the ground and shift your body to the left and counting to ten. Staying in the squat, shift your body to the right and hold it there for ten seconds. Go back to the left, then the right, each time counting to ten.

Try doing 10 repetitions on each side. Work up to 10 on each side first if it’s  difficult the first time you try it. Then stand up to relax. As with many catcher exercises, the idea is to develop lower body strength so energy is optimized and maintained throughout the game.

The blocking stance is used anytime a runner is on base or the batter has two strikes. Toes pointing outward and with the proper flex in the hips, create a 90 degree angle from the upper leg to the lower leg. Feel most of your body weight on the inside of your toes.

Perfect blocking form is as follows:

Holding the glove to the ground with the arms bent closes off the “5 hole gap” between the catcher’s torso and legs. The idea is to not let any pitched balls get behind you with runners on base.

A wider and higher base of the body allows for and quick reflexes and a more powerful throw to a base or tagging the batter out on a tipped ball on strike 3.

Practice blocking for balls down the middle, to the right, and to the left. Check your position after you set up. Your body moves in the direction of your throwing hand. Use knee pads if you don’t have guards.

Agility Drills For Catchers to do Alone

Agility drills help to build strength and agility like the back press drill and the weight shift drill. When a runner tries to steal, catchers need to be able to shift positions from a squat quickly. Being agile and limber gives you faster reflexes.

Draw or locate a straight line to work from. Wear full gear but without catcher’s mask.

The following line drill exercises should be performed in three sets and 20 repetitions apiece.

I would highly recommend investing in an agility ladder (Click to view on Amazon). They’re extremely diverse in their uses and are used by MLB catchers almost daily.

Rope jumping is about rhythm and coordination. Developing superior jump rope techniques makes feet lighter and able to shift easily at wide angles. Remember to wear catching gear. Each of these drills lasts for two minutes.

The first time, jump rope with both feet. Then switch to the left foot, then the right for 1 minute each. Lastly, alternate feet for two minutes, left to right, left to right.

Click HERE to use my favorite jump rope on Amazon.

In a squatting position, hop 90 degrees each time until you bounce a complete circle. Do 10 turns of 4 turns each (or 360 degrees).

Every exercise routine should include resistance exercises like push ups, situps, stretches and squat thrusts. Establish set and repetitions based on your endurance. In other words, when the exercise gets too easy, increase your set count by five, so 10 pushups increases to 15, 5 squats move to 10, etc.

Taking a ball out of the catcher’s mitt, gripping it and throwing it, all in less than a second requires focus and coordination.  Practice taking the ball from your glove and up to your ear, then grip it in throwing position smoothly and quickly.

Practice this drill to get fluid motion for these steps. Before simulating each throw, make sure your fingers are on the stitching for the fastest spin.

In an open area (doesn’t have to be a baseball field), or indoors, place some baseballs anywhere at random behind you.  If doing this drill indoors, use a tennis ball. Sit in a squatting position wearing your catcher’s gear. Turn your back to the placed balls and count from 10 to zero.

The objective is for the catcher to be able to get to a passed ball, grip it and throw it as quickly as possible when turning around.

This simple drills requires only a tennis ball and a flat surface. You do not use a glove.

Take a tennis ball and stand up about seven feet or so from a flat wall. Give yourself from five to ten minutes to complete the drill. Throw the ball underhanded to the wall and catch it with your throwing arm. Repeat throwing and catching for at least five minutes.

This drill can be done right after throwing the tennis ball at a wall. In this drill, wear a catcher’s mitt and squat in position. Throw a tennis ball low against a wall so it bounces on the ground on its way back.  Try and catch it.

Over time, throw the tennis ball harder at the wall so it bounces back to you faster. This is a graduated drill, so over time it becomes easier to field balls which take difficult bounces. This drill can be practiced before a game to tune up your reflexes.

This drill should also be done for at least five minutes at a time. It also improves eye-hand coordination and making it easier to field ground balls.

This drill tests throwing mechanics and helps build accuracy when releasing the ball. Use a catcher’s mitt, but do not use a baseball.

Rest on one knee in order to isolate the upper body. Simulate taking the ball out of the glove and throwing it. Catchers who practice this start to understand their own body movements and can fine tune their throwing skills. “Throw” the ball, flexing your wrist, gripping the ball.

Practice “throwing” harder and test your wrist flex and the mechanics of your release.

Another practice drill that you can perform at the same time is placing baseballs on the ground, indoors or outdoors. Practice picking up the ball and getting a 4 seam grip.  Try to work up to where you can grip the ball seams almost immediately. Also try with a glove, gripping it while it’s inside the glove and getting the correct 4 seam grip.

It is always a good idea to watch other catchers and study their movements in a game. While watching, focus on instant replays of great plays made by catchers in a televised game.