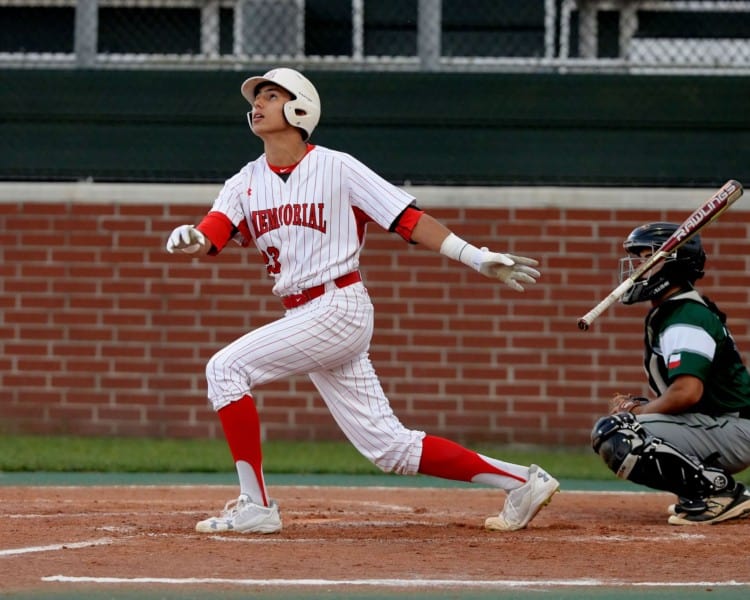 Winning baseball games requires good hitting and good defense. If a batting lineup has power gaps, or the bottom of the batting order is weak, team hitting needs to be improved. In the meantime, games can be won when you have a stellar defense that limits the amount of runs the opposition scores. Individual and team fielding improves with practice, and high school baseball fielding drills will raise the skill level of your infield and outfield.

Once your team masters fielding fundamentals, you can move on to more sophisticated drills that work on executing double plays and cutoff throws. Drills help improve players’ quickness and reflexes so you can limit runs scored by the opposing team.

This drill is for the pitcher covering first base after throwing to home.  Once the pitcher is able to run off the mound to the first base foul line, you can try a game simulation using a baseball and a runner.

The pitcher stands at the mound and the coach is in the first base area of the field. This drill can be performed in under ten minutes and should be repeated up to ten times. The more repetitions, the better your pitcher will execute the play.

Make sure that when your pitcher runs parallel to the foul line towards first, he takes small, choppy steps to the first base bag. The pitcher should always focus on the game going on around him and less on the play he’s in. He should be aware of the location of the runners, and be able to think about where to throw the baseball after he tags first with his foot.

His hands should always be up to give the ball thrower a large target to throw to. The pitcher should stay out of the path of the runner and avoid drifting toward the baseline.

For this drill, you will need four traffic cones. The drill requires your infielders to approach ground balls from the sides, instead of simply running towards it and waiting to catch it. Side approaches give your players more momentum and helps prevent fielding errors.

The cones are arranged anywhere on the field on grass. Place the cones about five feet apart in a reverse L shape. Place a baseball next to the third cone of the reverse L, which the fielder will approach as he runs around the cones towards it.

This momentum drill is designed to force the player to approach the ball from the side by going around the cones.

For this drill, you will need three traffic cones in the shape of a triangle. The middle cone is closest to the coach, who will throw ground balls to his players. The cones behind the middle cone which completes the triangle are placed 9 feet behind it.

The player stands three yards behind the two cones and the front middle cone is directly in front of him. This drill focuses on the player’s footwork.

This part of the drill develops your fielder’s backhand throw, emphasizing footwork and soft hands.

Catching a ground ball requires excellent footwork and coordination. Infielders must set in the ready position in order to can field and throw quickly. If your infielder can save even one second retrieving the ball, it can mean the difference between a single and an out.

The ready Position Drill can be done anywhere on the baseball field. Gather together your infielders and coach them in the proper ready position as a team. Players should stand about three feet apart from each other. The coach watches to make certain they get into ready position. Players stand on the balls of their feet. Check for the following:

You as the coach simulate throwing the ball to your players. The moment your arm is raised to throw, your fielders will squat into ready position. Observe each infielder one by one. legs spread, rear down low, and gloves are on the ground.

Remember: when infield players field ground balls, their bodies should be low.

Infield players line up on the infield dirt, at the edge of the grass. Coach stands 15 feet away, and has a bucket of baseballs.

Make sure each infielder has 10 attempts to crouch and throw back to you. This drill should last about 10 minutes.

The shortstop position is key for most of the double play situations that occur in a game when there is a runner either on second base or running towards second from first. When the shortstop is in top defensive form, he will execute double plays well. The game’s momentum can change when double plays are successful. Turning a double play requires split second reflexes, fast reaction time, skilled footwork and awareness. It’s also important to avoid injuries as the shortstop moves, spins to throw and stays out of the way of base runners.

In this drill, the coach uses his shortstop and first baseman.  You can either bat balls or throw them to your fielders. The focus here is on the shortstop and how effectively he touches the second base bag before he throws to first. The first baseman also trains to extend his leg to the bag when stretching his body to catch the thrown ball in his glove.

Your first baseman and shortstop in place. You hit a ground ball to first base. He fields it and throws to the shortstop going to the bag at second.

The shortstop steps toward second base with good footwork, catches the ball, taps the bag with his left foot for the first out, then throws the ball cleanly to the first baseman in ready position. This is the execution of a 7-6-3 double play drill.

Fielding a ball correctly can be broken down into several steps. Having a tight infield that works well individually and together will make them work well as a single unit when trying to throw out runners and turn double plays.

This drill requires every infielder to be at their positions by the bases. The coach stands at home with a bat and a bucket of balls.

The coach now hits a ground ball to the first baseman and watches as he charges the ball. Players approach the ball quickly in controlled movements. Charging should be slow and studied and not fast. A slow approach will prevent fielders from over running a hit ground ball.

To field the ball, infielders spread their legs shoulder width apart, their heads down. The bare hand of the fielder is on top and his gloved hand is on the ground. When he reaches the ball, he traps it between his glove and the infield grass.

Now that it’s in the infielder’s glove, he takes his right foot, steps inside his left, squares his shoulders to the target.  Hips square with the knees, now he can make a good strong throw.

This drill helps players catch a ball that’s hit over their heads. These are either high line drives or poor throws that came from other fielders.

The coach arranges two players about 10 yards apart from each other.

Once your players become adept at catching high line drives, place a base bag between them and have each catch high line drives and land with their feet on the bag. This is especially useful for first basemen.

It’s important for this drill that the players assume they are in a real game situation. When the outfielder retrieves the ball, he throws quickly to Infielder 1, as if there are runners moving on the bases.

It’s a good idea that the throws are short so your players can get a lot of repetitions and practice in making relay throws.

Set three traffic cones in an open area, about a yard apart. The player faces the first cone. 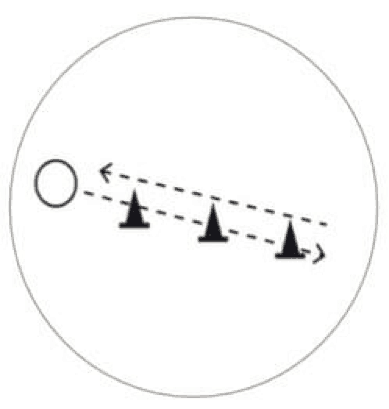 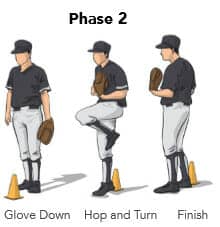 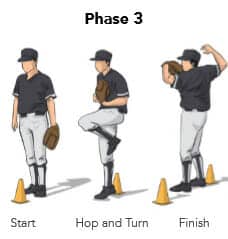 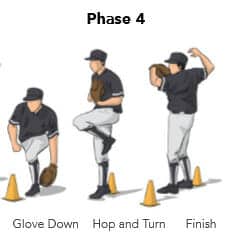 Make sure the player lands on the balls of his feet, not his heel. Once they improve their moves over and around the cones, make them work through the drill faster.

This is a fantastic team drill that players really enjoy. To set up, place your players at every infield position, including your catcher.

When everyone is ready, this team drill begins.

The sequence repeats with each infield player. The coach now hits to the second baseman, who fields the ball and moves to first base.

The drill is over when all the players are back in their original positions. The main idea in this drill is that there is a lot of player movement, quick and precise, and there is also always a ball in play. The coach can decide to wait to hit the next ball until the first one in play was returned to him.

There’s nothing more important than players assuming the correct fielding position. This drill works on the fundamentals of proper stance infielders take to field rapidly hit ground balls hit directly or o the left or right of them.