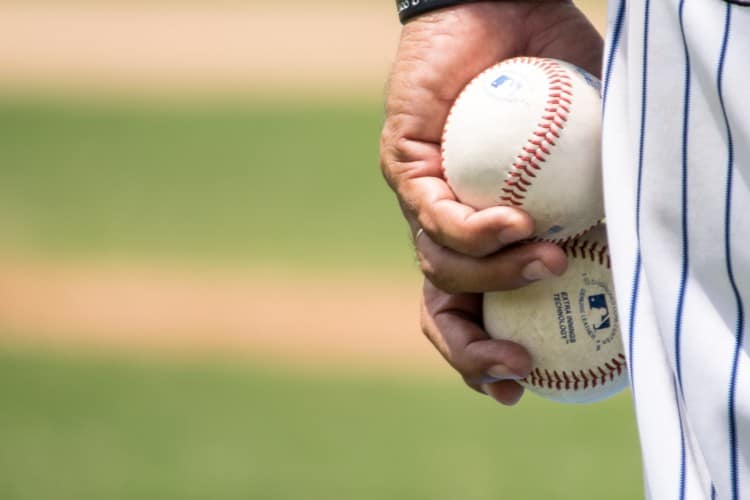 There is often nothing more enjoyable than taking a friend or loved one to a baseball game at a stadium. The average price for a ticket to a game today is about $30.00 before buying food or drinks at one of the ubiquitous concession stands, where the cost for the outing can double. But there are built in costs for the stadium and the League as well for putting on a nine-inning game. One of the expenses is the cost of team equipment for the players and management, such as security, grounds keeping, and baseballs.

So, how many baseballs are used in a game? During an average nine-inning game, assuming fair weather and normal wind conditions, about 120 balls will be used, a number which will go up if the game goes into extra innings, as well as other factors.

Baseballs currently cost about $9.60 each, and estimates show the cost of baseballs used in a single game is about $1000.00. This expense is recouped by the sale of tickets, food, beverages and merchandise from concession stands.

One of the biggest expenses to Major League Baseball is baseballs each team uses over the course of 162 regular season games, not including playoff and World Series games. Each of the 30 major league teams plays 162 games for a total of 2,430 games in a season.

In each of those 2400 plus games, 100 to 120 balls are used by two teams per game.  Over the course of a year, the league spends a whopping $10 million on baseballs alone. It has been predicted that even more baseballs will be used in each game due to several factors including players’ rising on base percentages. The more hits, the more baseballs will be need to be replaced.

The Cost of One Game of Major League Baseball

Aside from the costs of baseballs, gloves and bats, putting on a typical Sunday afternoon game gets quite expensive. The stadium provides personnel for security, concession stands and ticket takers, and utilize about 400 additional part-time staff members working every game, most of them food and beverage vendors. The remaining staff take on a host of other duties, such as being parking attendants, ushers, office workers, laundry services, bartenders, wait staff and security personnel.  Each of these are paying positions.

In addition to cost of personnel, utilities like electricity for lights, heating and air conditioning for dome stadiums add to cost. The expenses can be astronomical, as it is estimated stadium lights alone cost about $750.00 per hour when turned on;  simply starting up the circuit breaker just before the lights turn on can run hundreds of dollars.

Playing equipment such as bats, gloves and baseballs are paid for by the team, with some contributions coming from the parent Major League Baseball organization.

In terms of the work invested in making a baseball from wool yarn, cork, rubber and cowhide leather, at about $7.00 apiece, baseballs are not that expensive. The league buys in bulk, purchasing over the course of a season almost a million baseballs, so the cost of each baseball is cheaper than buying a dozen at a time from a sporting goods store, where the cost more than doubles to about $15.00 per ball.

All the baseballs used in major league play are made in Costa Rica by the Rawlings Company, who have been making baseballs for the league for over fifty years. Much of the process of making a baseball, such as stitching wool yarn into the cowhide pieces of the ball’s cover is done by hand, as automation has yet to catch up. In order for the stitches to be even, humans sew them by hand. It takes about 15 minutes for a baseball to be tightly stitched together, and workers receive bonuses for exceeding daily work quotas.

Using machines for the inner core and the rest of the manufacturing done by hand, each baseball produced must be identical to every other one, so the quality control standards at the baseball factory in Costa Rica is extremely high.

Why Are So Many Baseballs Needed?

These days, each team throws an average of 150 pitches per game, and the number of pitches thrown is predicted to rise even further in the next several decades. 1988 was the first year pitch count data was recorded, and in that year teams pitched about 135 balls per game. Twenty years later, in 2008, the pitch count rose to approximately 145 pitched balls by each team in a nine inning game.

Since 1988, games now take longer to play. One of the reasons is the number of at bats of each player has risen because batters hit the ball more often now. Not only have batting averages gone up, but so has slugging percentages. A player’s slugging percentage is calculated by two constants: total bases earned from singles, doubles, triples and home runs, and dividing that into how many times the player went to bat. It’s been calculated that currently, 8% more pitches are thrown, resulting in the game lasting 8% longer than it did in 1988.

During a typical nine inning game, each baseball stays in play for less than six pitches. Every time the batter hits a foul ball, the baseball is replaced. If the batter foul tips the ball, or if the ball comes into contact with infield dirt, a new ball is substituted. A pitcher can request a new ball at anytime, and balls are routinely replaced at the discretion of the umpire. Baseballs are in constant movement during a game, pitched and then caught by the catcher, or put in play by a hit to the infield or flied out to the outfield. Relief pitchers warming up before coming into the game require baseballs to practice with.

What happens to the Discarded Baseballs?

Baseballs taken out of play are marked with an “X”  or have “brand new” written on them so they’re not confused with balls that are going to be used in the game. Out of play baseballs are marked so they’re not stolen by personnel or ball players and used for autographs. Discarded balls are used mostly for batting practice the following day. After they’re used in batting practice, the balls are shipped down to the team’s minor league operation and used there for the farm team’s batting practice. The home team provides the baseballs that are used for each game in their home stand.

There have been many iconic moments during the 150-plus years of organized play. Baseballs used when famous milestones happened, such as when Babe Ruth hit his last home run in 1935, Don Larsen’s perfect game in Game 5 of the 1956 World Series against the Los Angeles Dodgers, and Barry Bonds’  73rd home run in 2001, fetch an incredibly high price at auctions.

The highest price ever paid for a baseball was $3,200,000.00 for the ball Mark McGwire hit for his 70th home run in 1998. Autographs on baseballs of well-known players also yield high prices. A baseball featuring the signatures of 11 well-known players at the first annual Hall of Fame induction ceremony in 1939 sold for over $600,000.00 and would likely fetch an even higher price today. Players autographs on the ball include Ty Cobb of the Detroit Tigers, Babe Ruth of the Yankees and Honus Wagner of the Pittsburgh Pirates.

Individual baseballs are desired by collectors for more infamous and not-so-heroic events in the sport’s history as well. In Game 6 of the 1986 World Series between the New York Mets and the Boston Red Sox, Red Sox first first baseman Bill Buckner committed an error that would go down in history. The error only added to the deepening troubles of the already struggling Red Sox team.

In the series, the Boston Red Sox were leading the heavily favored Mets three games to two. Buckner came on the field in the bottom of the 10th inning during a double switch called by Red Sox manager John Macnamara. With two outs and with the Mets’ Ray Knight holding at third base, Mets Center Fielder Mookie Wilson came to the plate and hit a slow-moving ball that dribbled to first base. Buckner rushed towards the ball, and in doing so, missed it with his glove as it rolled slowly between his legs and behind him. Knight crossed home plate on the error from third base, and the Mets won, making the series tied at three games apiece and forcing a final Game 7. The Mets won that game and the whole Series, and the ball that famously went through Buckner’s legs sold for $420.000.00.

A baseball that was not kept by a fan earned the fan $70,000.00. Derek Jeter of the New York Yankees’ 3000th hit was a home run in Yankee Stadium. The ball was caught by a Yankees fan who gave it back to Jeter as a keepsake of his milestone. The fan was then rewarded with over $70,000.00 work of cash and gifts for their selfless act.