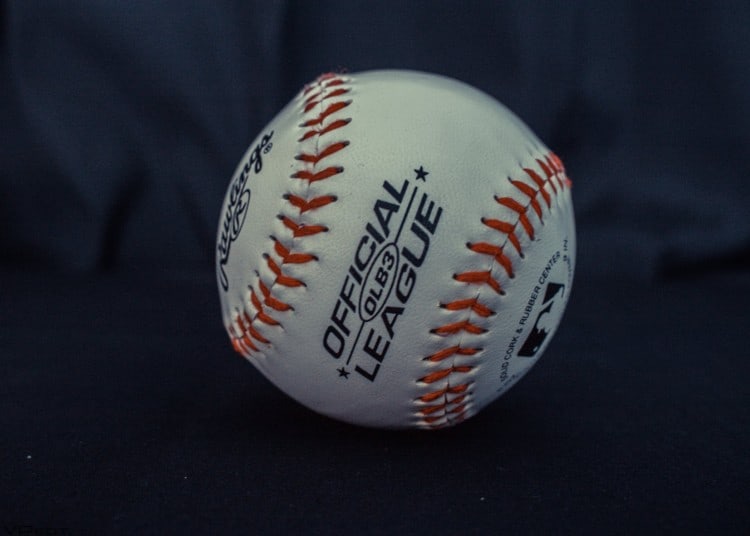 The simple, unsophisticated materials of cowhide, rubber, cork and a length of yarn, have been the essential components of baseballs for the last 150 years. In an era of technological breakthroughs such as synthetics and automation, league-quality baseballs are still partly made by hand.  All the baseballs used in professional play are put together from inner cork to cowhide stitching by workers in Costa Rica by the Rawlings Company.

So how many stitches are there on a baseball?  There are exactly 108 stitches on a baseball. The first and last stitches are completely hidden.  Each baseball’s stitching is sewn by hand using 88 inches of waxed red thread.

It takes about 15 minutes to hand sew the two figure eight pieces of exterior cowhide together before passing the baseball into a rolling machine for 15 seconds to level any raised stitches.

What is the Cost for New Baseballs Every Year?

One of the costliest investments in Major League Baseball is for all the baseballs that are needed for an entire 162 game season not including playoff and World Series games. Each of the 30 major league teams plays this many games, for a total of 2,430 games in a season.

Rawlings manufactures about 80,000 dozen baseballs each year for league play, or 960,000 balls. At an average cost of $6.79 per ball, Major League Baseball spends a whopping $8.56 million dollars every single year just to keep up with the demand.

In each of the over 2,000 annual games played each year, statistics explain why there is a need of vast quantities of baseballs. During a typical nine-inning game, an average of 100 balls will be used, so the League spends over $1000.00 in baseballs alone each game. It has been shown a baseball rarely, if ever, stays in play for more than six pitches, and usually no more than three pitches. There are several reasons why a baseball doesn’t last that long despite its high cost.

Why are Baseballs Replaced Over the Course of a Ballgame?

Should the umpire decide to keep a ball in play that’s made contact with infield dirt, pitchers can take advantage by adding scuff to the ball. Scuffing the ball has an effect on the trajectory, causing the ball it to move through the air unnaturally, thus making it harder to track and hit.  The home team supplies all the baseballs used in each game and uses the discarded baseballs for their batting practice.

How Is a Baseball Made?

The basic materials used for making each and every baseball is cowhide leather for the exterior of the ball, yarn for the stitching and rubber coated cork for the inside or “guts” of the ball. The cork and rubber center of a baseball is referred to as the “pill.”

A cutaway illustration of a baseball shows the layers of concentric circles inside, with the rubberized cork as the “nucleus”, with two layers of cork molded around it. The first step in making a baseball is molding two hemispheric shells of black rubber to the rubberized cork. Red rubber gaskets fill in the space between the two black rubber shells.

Next, a layer of red rubber is molded around the outside of the black rubber hemispheres. This is  the “pill,” and it’s molded into a perfect circle that weighs less than an ounce. After the pill has been shaped into a circle, a thin layer of cement is applied to the surface. The cement layer helps to keep the wool yarn in place on the pill before “winding” the cowhide onto the ball’s surface.

Wool yarn stored at a constant temperature and humidity is wound around the pill. The work is assisted by computerized winding machines that make the sphere maintain a constant level of high tension. High tension eliminates soft spots in the ball and makes the surface uniform. As the winding process proceeds, the ball is constantly weighed and measured by computer to ensure it conforms to official Major League Baseball size requirements

The yarn wrapped extremely tightly, giving it the appearance of fine thread. In all, three layers of wool are wound around the baseball. The first layer is made of four-ply gray yarn, the second is three-ply white, and the third layer ios three-ply gray, totaling over 200 yards.

In the final step of the winding process, a layer of 150 yards of finishing yarn that is a poly/cotton blend, is wrapped around the ball to protect the wool yarn and hold it in place. Then the tightly-wound ball is trimmed by machine of excess fabric. A thin layer of adhesive is applied, to which the cowhide covering will be secured.

Stitching the Baseball Together

The cowhide that becomes the surface of the baseball is cut into two figure-8 patterns, each cut covering half of the ball. These pieces are stapled temporarily to the ball’s surface. The stitching is done by hand, since automation has so far been unable to ensure evenness of the ball after stitching. Here, the work dips the cowhide in a solution so its softer and easier to manipulate.

The two figure-8 coverings are stapled to the ball, and are ready to be sewed to the sphere. Using 88 inches of waxed red thread, the worker uses a total of 108 to sew the cowhide pieces to the ball. The first and last threads are completely hidden. This final step of hand stitching takes about 15 minutes to perform.  The ball is then run through a rolling machine to even out the stitching surface. After final inspection, the approved baseballs are stamped with the Rawlings logo, and made ready to ship to the league.

Does the Way Modern Baseballs are Made Affect Home Run Records?

Theories have been put forth from many corners of the sports world, from amateur followers of the game to raw scientific research at the university level,  in an attempt to explain marked changes in players’ batting statistics.

For example, 2017 has come to be known as the season for hitters. Before that, in 1998, Mark McGwire and Sammy Sosa both broke the record set by Roger Maris in 1961 for the most home runs in a single season of 61 home runs. McGwire batted in a total of 70 home runs, and Sosa hit 66 out of the park. Speculation led to questions about the use of steroids, and in a Congressional investigation McGwire and Sosa both admitted to using steroids during the 1998 season, although McGwire revealed that he had also taken steroids in previous years when records weren’t broken.

In 2001, Barry Bonds beat both those records by hitting 73 total home runs and holds the record for most home runs in a season to this day. He too, however, admitted to using steroids.

In 2017, however, players were monitored in unprecedented ways for steroid use, and use of the drug was not seen as contributing to that year’s incredibly high home run statistics. In all, hitters batted for a whopping 6,105 home runs in 2017, more than any other year on record. Researchers found evidence pointing to differences in the baseball’s manufacturing to account for the increase in slugging and home runs, although not conclusive.

A change was noticed after the All-Star Break in 2015, when it was observed that balls flew further than ever before.

In a study conducted by the USC School of Medicine in 2017, it was revealed baseballs changed in their density and in the chemical composition of the baseball’s core.

In addition, modern baseballs are less dense in the center and weigh half a gram less than  balls made prior to 2014. The research also showed that baseballs made after 2015 were bouncier, with less air resistance than  earlier balls.

In the end though, the change in the weight and buoyancy of baseballs are still only theories, with some suggesting that the minute difference in weight explains the vast increase in league home run production, while others attribute increases in slugging percentages to better physical health and training of baseball athletes.

Baseball as an organized sport has been in existence for over 150 years, and its popularity has not waned. It’s still seen by more fans than any other American sport. It’s popularity rose early on and was preferred over similar games like cricket. Baseball is a more exciting sport to watch due to its higher level of aggressiveness than cricket, and, unlike cricket, the batter must run every time the ball is in play. American baseball was inspired by the game of cricket,  but has since outshined it and has become more popular than its predecessor.