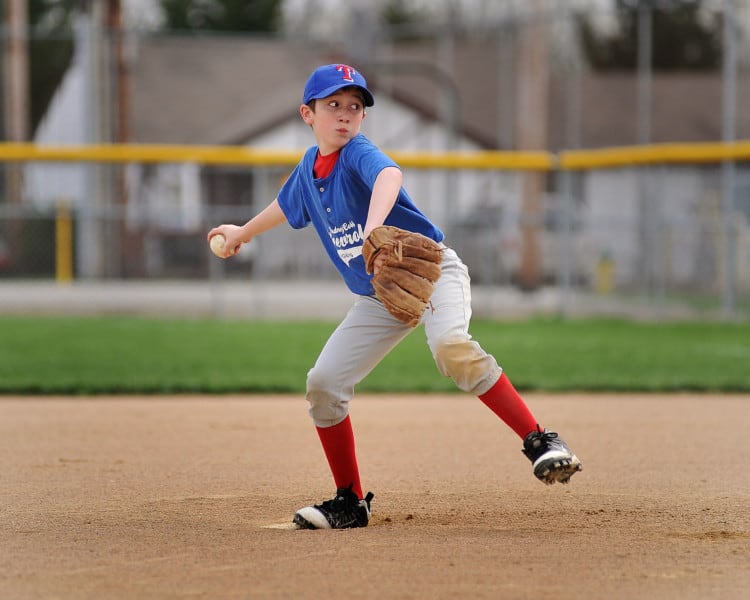 Organized sports has seen a rapid increase in popularity, with more and more children involved in baseball, football and basketball in the last two decades than ever before. With that growth there has also been an increase in overuse injuries, and in little league baseball, a condition known as “Little League elbow” has been on the rise whose symptoms include sharp pain, aching and swelling.

The condition is painful and limits a young player’s ability to use his arm. In its more advanced stage, little league elbow results in small elbow fractures, bone spurs and the onset of early arthritis when steps are not taken to prevent the onset of the condition.

Adults are different than children in one obvious way: children’s bodies are still in a growth phase. Our bodies have eight major systems including the musculoskeletal system. The human body exercises while it’s still growing, including running and throwing a baseball. However, lacking the full development found in adults, growing joints, tendons and ligaments have a much lower impact threshold, and that fact alone makes it important for parents to be aware of sports injuries such as little league elbow, how to treat it and how to prevent it.

What is Little League Elbow?

Because children are still growing and developing, the demands of sports on the child’s body can be overwhelming. This is especially true if the child isn’t given enough rest time between active sessions. Little League elbow is a painful condition. But it can be treated with proper care.

The condition begins gradually, and may go unnoticed for a period of time. The first symptom that’s noticed is a “pop” that occurs and is accompanied by pain that lasts throughout the throwing motion, then goes away. There is also a feeling of heaviness in the throwing arm when it pops.

Swelling and pain are also present along the inside of the elbow with injury to the ligaments, tendons and bone. These symptoms can be present even at rest and become worse when throwing.

As the condition progresses, the elbow begins to feel tight, and there is a marked decrease in the range of motion. At this point, the player will no longer be able to fully extend their elbow.

Young athletes often try to minimize their symptoms. They’re really into playing and don’t want to stop, and children often will say they’re okay even when they are having pain each time they throw a pitch.  It’s important for parents to observe their child closely, noting if he winces when throwing the ball. Left untreated, both the symptoms and the condition will worsen, taking your Little League out of the game for an extended period of time. 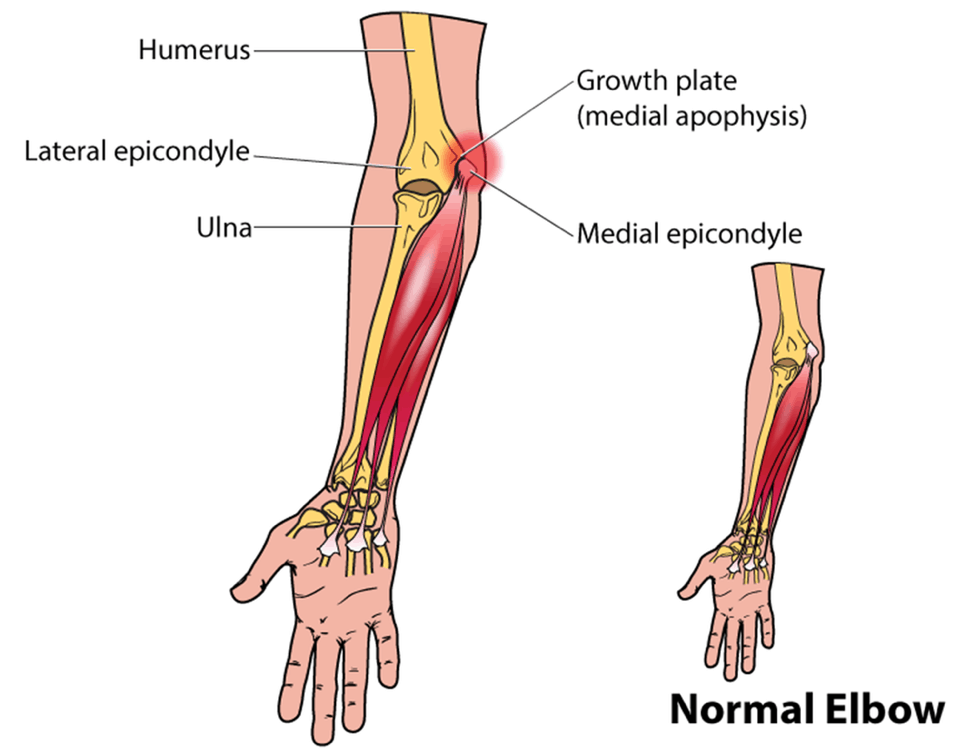 Little League Baseball, Inc. was founded in 1939. Its main function is organizing youth baseball leagues in the United States and around the world. In their 80 years of existence they have become the leaders in assuring the health and welfare of children playing baseball between the ages of 8 and 17 years of age.

Children between the ages of 8 and 15 are most vulnerable to Little League Elbow, so the Little League Organization has established youth pitching guidelines which limit the amount of throws pitchers in little league can make in any regulation baseball game.  Although these guidelines can’t be enforced directly, Little League standards are adhered to by most local youth baseball organizations.

In the Little League Rulebook, the guidelines for pitch throws are as follows and are based on the player’s age group.

The Little League organization also established helpful rules for rest periods for youth players under the age of 14:

For Little League pitchers between the ages of 15 and 16, the League requires:

These are loose guidelines and are for both practice and competitive play. It’s also advised by medical professionals that young pitchers (or players who throw a good amount) to only play three to four consecutive innings in each game. If the pitch count is higher than shown in the chart above, then they should cease throwing sooner.

How to Diagnose a Player with Little League Elbow

Tests such as x-rays or an MRI of the elbow will help determine if the growth plate is still open and if it is widened. X-rays will also reveal other bone problems, loose bone chips, or if there is an early onset of arthritis. Keep in mind that X-rays made for players with Little League elbow may show nothing abnormal, yet they may still experience pain associated with the condition.

A doctor will first conduct a physical examination of the player, first inspecting the elbow for “flexion contractures,” determining if the player can fully extend his arm. The doctor will then compare with the arm having no symptoms to the one in pain to see if the affected arm can be extended as far. 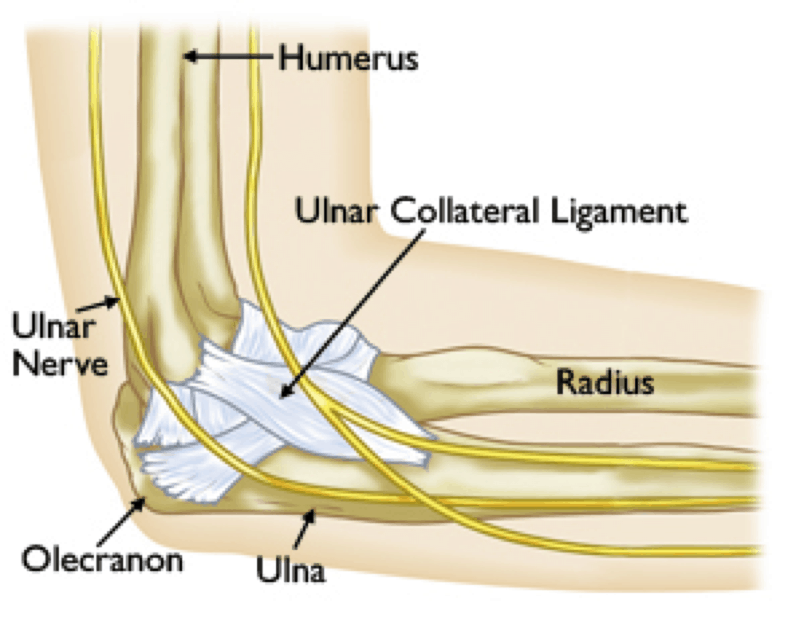 Physicians also check to see for any unusual tissue swelling and look for any unusual bone formations that the child was born with, as a guideline ti compare with a normally developed arm.

The exam focuses on palpation, where the doctor uses his hands and feels the affected elbow area and muscles and joints from the outside, to determine if x-rays or an MRI is needed. The elbow will be flexed to locate the internal source of the pain. The doctor will use this approach to determine if there is damage to the UCL ligament located on the inside part of the elbow.

How is Little League Elbow Treated?

Once a young player is diagnosed with Little League Elbow, the treatment is geared toward limiting the amount of damage so it won’t worsen, or become a chronic condition. First and foremost, the player needs to completely stop throwing. The elbow and surrounding area needs to be rested.

The pitching motion which caused the condition at the elbow in the first place must be avoided until the player is free of symptoms. This usually takes between 6 and 12 weeks, based on how bad the initial symptoms were, and how well the player avoids pitching during his rest time.

In addition to rest, anti-inflammatories can help to speed up recovery. Medications like ibuprofen and naproxen are often prescribed to aid in reducing swelling and easing pain symptoms. Steroids should be avoided. Casts or arm sleeves are usually not necessary.

Once the player is pain free, he can resume throwing but needs to focus on how much throwing he does. Fastballs or curveball pitching are acceptable throwing pitches, and pitch speed should be worked up to slowly while monitoring the elbow for pain or swelling, or both. Pitches like sliders or sidearm pitches should be avoided at all costs until the ligaments near the affected elbow are completely healed.

Exercises to Rehabilitate the Elbow?

Once the pain is gone from the elbow and the swelling has disappeared, young players can perform rehabilitation exercises to strengthen the arm and elbow and help bring free movement back to the affected area. The exercises focus on stretching and strengthening.

The stretching exercises can be done as soon as pain and swelling symptoms disappear. The exercises to develop strength can begin as soon as normal stretching is pain free.

The illustration above shows the proper position of the elbow and the rest of the body when performing stretching and strengthening exercises. The first exercise is to improve the wrist’s range of motion on the affected arm.

Bend the wrist of the injured arm forward and back as far as possible without causing too much pain. Perform 2 sets of 15 each.

Pronation is the rotation of the hand and forearm in a way so that the palm faces backwards or downwards.

Supination is the rotation of the forearm and hand so that the palm faces forwards or upwards.

For this exercise, bend the elbow of the injured arm 90 degrees while keeping your elbow at your side. Turn your palm up and hold it for 5 seconds. Then, slowly turn your palm down and hold it for 5 seconds. Make sure to keep your elbow at your side and bent up at 90 degrees while doing the exercise.  Try doing 2 sets of 15, which each combined pronation and supination counting as one of 15.

Hold a can of soup or the handle of a hammer with the hand on the side of your injured elbow. With the other, non-injured hand, bend your wrist up.

Then, let go of your wrist and use only the injured side hand to lower the weight slowly back to starting position. As before, try gradually increasing the weight of the held object. Perform 3 sets of 15.

In this, hold a hammer by the handle in your hand and bend your elbow 90 degrees. Slowly turn your hand so your palm is up and then down. Perform 2 sets of 15 for the entire motion.

Take a can of soup and hold it with your palm facing up.

How Can Little League Elbow be Prevented?

Being aware of the fact that the joints and ligaments are still growing and therefore not as strong as an adult, a common sense approach to fitness and exercise will help to strengthen the body to improve the chances of avoiding getting Little League Elbow.

Of course, there is no way to ensure that it will never happen, even when a regimen is followed, but ti certainly improves the chance of avoiding the condition. The following are recommended to help make the injury less likely to occur:

It makes a lot of sense to keep the body of any age player fit and conditioned. Resistance training is a great way to baseball players to keep fit and ready to play at the level needed for games and practice. No weight are required, so young players use their own bodies for resistance exercises. This kind of exercise should focus on the arms, shoulders, trunk and back. Squats, pushups and jumping rope are three types of resistance exercise that can be done at home.

The young body (which is still growing) when used in sports is tested and goes to the extreme of what it is capable of doing. Pitch counts have been established to protect young players’ shoulders and elbows, and once the number is reached, the arm should refrain from the motion for the dates recommended by the Little League organization.

In addition, it is highly advised for young baseball players not to play the sport in the off-season. Instead, playing other sports like soccer and basketball work on other parts of the body and could be substitute for resistance training exercises during the season.

Young players are not always good at listening to what their body tells them, but they should be reminded to do so. If pain accompanies pitching the baseball, they should stop throwing right away. In addition, a ballplayer who says he’s feeling pain around the elbow or the shoulder, or popping of the elbow, should not be allowed to throw any more that day. Until the pain goes away completely, parents and coaches need to seriously consider removing him from the pitching rotation until the pain or swelling disappears completely.