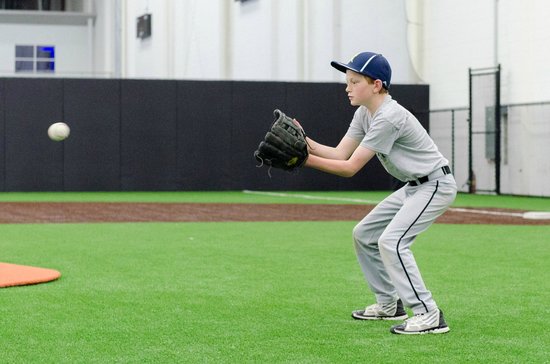 The benefit for many of these drills is that they can be done even in your own home (size pending). Of course, the more room that you have to use, the easier that these will be, but there’s always room for improvement when you are limited in your space.

Let’s dive into some outfield drills you can do indoors.

This drill can be done with the least amount of space available. This drill teaches the player to squeeze their mitt at every catch.

1. Teach the player to squeeze their mitt on every catch.

2. Assess weaknesses in ball control into the mitt.

This outfield drill is one of the most simple ones that you can do indoors. All you need is a tennis ball, a floor, and your baseball mitt. Lay on your back and begin tossing the tennis ball towards the ceiling. The tennis ball should always be caught with the mitt. Repeat until your arm falls off!

This drill is as old as time. By simply laying on your back and catching the tennis ball into your mitt, you’re subtely teaching yourself to see the ball into the mitt on every single catch. This drill might be harder than you think. Tennis balls are very light and bouncy.

You might find yourself having a hard time at first, and it will feel odd to have such a light ball enter the glove, but this will translate over to games. You’ll never miss a fly ball again.

For this drill, you might need a pitch back net. If you don’t have one, a wall would suffice for this, but if you’re going to do it against a wall, make sure you use a tennis ball or set up a piece of wood against the wall so you can throw the ball at it without damaging your drywall.

1. To practice ground balls in action.

You will need a baseball, and a glove. To set up this drill, set up a pitch back net about 20-40 feet away from the fielder. Throw the ball at the net and field every ground ball.

By throwing the ball at the pitch back net, you can successfully complete this indoor outfield drill with rapid succession. Give each player about 15 tosses (roughly 60 seconds) before you move on to the next player. It’s important to keep this drill at a high tempo.

This drill will teach the player to turn their body in a specific way to efficiently get to the ball. This is commonly referred to as “opening the gate”.

1. To teach the player, by repetition, which way to field a fly ball.

You will need a ball, 3 cones, and a mitt. Set up the cones in a triangle.

Have yourself (the coach) and the player stand at one of the corners of the triangle. Throw the baseball in the form of a pop fly to one of the other corners of the triangle. Make sure the player is turning their body the correct way to catch the pop fly.  After each catch, have the player hustle back to the original starting cone to repeat the process to the other side of the cone. Toss the ball to each cone at random succession. Do this for approximately 60 seconds per player and repeat for a total of 4 rounds.

This drill can take place with 2-3 outfielders indoors. This drill will teach each member of the outfield efficient call offs. By calling for the ball, you lessen the chance of a mis-communication and error.

1. To teach outfielders to communicate with each other

2. Repetition of calling for the ball when you’re at the best spot to make the play

Two to three players can participate on this drill at a time. Set up each outfielder equal distances apart from each other in a straight line. The players will wait for the coach to throw the ball up into the air at a random location. It is the job of the outfielders to efficiently call off other players if they will be making the catch.

Have the players stand in a straight line as the coach tosses up balls. By throwing the ball in random locations between each player, you simulate real-game activities. Have the players learn how to make appropriate call offs to their teammates.

The Zig Zag Drill is a great indoor drill for outfielders. This drill teaches the athlete to never keep their eye off the ball and to keep their footwork on point. This teaches the player to never turn their back to the ball. Once you do that, you’ll lose the ball entirely.

1. To teach the player to always keep their eye on the moving ball

3. Eliminate player’s bad habits of back pedaling to a ball.

You can increase the intensity of this drill by pointing the ball back and forth several times before you throw it. This will increase the player’s hip turning efficiency.

This teaches efficient fly ball fielding and this is one of my favorite drills to do indoors for outfielders.

This particular indoor drill is great for outfielders to practice on their basic catching fundamentals. It’s easy to pick up bad habits throughout the season, but this practice can help the player get back to the basics.

1. Promote getting behind the ball to square up with the infield on a catch

2. Improves footwork and timing of the player’s catch to transitioning to a throw to the infield.

One player will practice this at a time. Have the coach stand about 25 feet away from the player. The ball will then be lobbed to the player so that the player will have to catch the ball and land on their glove side foot at the same time the ball is caught.

By doing this, you diminish the amount of extra steps you will have to take to perform a quick catch and throw to the infield. This drill is quite commonly overlooked by most coaches.

This drill is great for outfielders, but it’s going to require a little bit extra room. If you have a basketball gym to use, this will be perfect for it.

1. Proper timing and footwork to the baseball

You will need multiple players for this drill for a continuous relay effect.

I recommend getting a pitch back net for something like this.

I named this drill after a football term because it is similar in effect to a long football pass. The player will circle around the coach and go out for a fly ball pass in whichever direction the coach chooses to throw it.

1. Catching the ball on the fly while moving.

2. Teaches efficient angles to the baseball in the air.

A player lines up next to the coach. The player will run behind and around the coach and go out for a football style pass. The coach will then toss the ball up in the air at a random location. The player will track down the ball and make the catch on the move.

It’s good to do a few reps of these with everyone on the team. They’re a great warmup for pre-game as well.

This drill is good for players to practice catching line drives on the run. It doesn’t require more than 20 yards of area as well. However, like most outfield drills, the more room you have the better, but this can still be performed indoors.

1. Catching line drives on the move

Once the players have gotten a few reps of this drill in, they can set up on the other side of the coach to perform the same drill from the opposite side.

This drill is great for field awareness. All you’ll need for this is a baseball, a mitt, and a wall. The coach will have the player stand at different distances from the wall and the coach will toss the ball so that it lands at, or just short of the wall.

Set up 3 different cones, each at varying distances from the wall. The coach will stand approximately 15 feet away from the player and will proceed to toss the ball at, or near, the wall. It is the player’s job to make the catch without bumping into the wall.

This can be a great drill to use for spatial awareness on the field. It mimics game like situations and can really be a clutch catch, especially in youth and high school leagues where these kind of catches are not common. Typically, you will see an outfielder lose the ball in the air when they look back to see where the wall is.

Teach your athlete to keep their drop-step position with their opposite hand out behind them to feel for the wall. After time, the player will develop field awareness without thinking about it.

This drill mimics a game like situation in which the baseball rolls to the fence. This drill increases the outfielders efficiency and can be done indoors.

1. Increase fielding efficiency on balls hit to the fence

This drill teaches proper fielding mechanics by not picking up the ball with their glove. This can be a nasty habit that can be hard to break. This also teaches the player to not take unnecessary steps to get the ball to the infield.

This outfield drill you can do inside is great for teaching player’s to field and hit the cutoff man efficiently. If this drill is practiced enough, you’ll see players evolve into fielding machines.

In a larger area, such as a basketball gymnasium, have a player line up in the corner of one side of the room. The coach will stand at the opposite side of the gym in a corner and will roll a baseball to the vacant corner on the player’s side.

It’s important to practice this drill in both directions so that the player can equally practice both sides of the spin.

This play is great for simulating game-like situations in which the outfielder must cut off the ball and throw it to his cut-off man quickly.