The purpose of fielding drills at the tee ball player level is to help improve their reflexes and coordination. Tee ball players are between the ages of 4 and 7, and at this age, they begin to learn how to use their baseball glove. On the field, they develop the body mechanics required to be effective fielding and throwing the baseball. These 10 Tee ball fielding drills are fun ways for young players to begin to develop coordination and reaction time. As they get older and compete in regular baseball games, they’ll apply the skills they learned in tee ball.

Performing tee ball drills require a batting tee, baseballs, gall milk jugs, and traffic cones. It’s important for young players to have fun in the process because enjoyment is the best way to connect with very young players.

This drill works on the fundamentals for tee ball players to learn to catch with two hands. For this drill, you’ll need a large square playing area, an assortment of whiffle balls and tennis balls (about 9 balls in all), and three cones. The drill should be performed without baseball gloves. 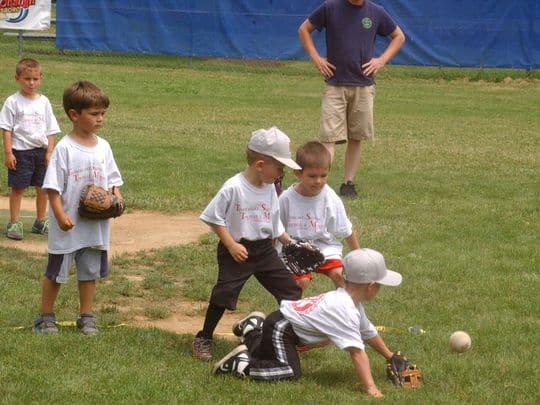 Separate the team in half on either side of the traffic cones in the playing area. Place the balls around the players on each side. The objective of this competition is to make players catch the balls with both hands, then throw to the players on the opposite side.

Using a timer or stopwatch set for one or two minutes, the coach instructs players to stay on their side and standing in place. At “Go”, the players pick up the ball and throw it to the opposing team on the other side of the cones.

After the allotted time is over, the coach says “Stop.” The balls are counted, and the team with the least amount of balls on their side is the winner.

Coaches can repeat this drill for a total elapsed time of 10 minutes.

This drill requires youth players to field balls by scooping them off the field using both their hands. The drill introduces players to fielding and helps develop the body mechanics to catch ground balls before they use baseball gloves.

For this drill, you’ll need tennis balls and three cones. Players use their bare hands instead of baseball gloves for this exercise. It would be great to have two assistants with you.

Line up three cones about 8 feet apart. Line up your players, about three in each line, behind each cone. Make sure before you start that players are in an athletic fielding position with their feet shoulder width apart and their knees bent.

Demonstrate for your players before starting how to correctly scoop the ball. Players should have their gloves placed on the ground between their legs.

Now roll the tennis ball to the first player in line. He scoops the ball into his glove by using his bare hand on top of the glove. Like an “alligator mouth,” his bare hand pushes the ball down into the gloved hand. Then the player throws the ball back to the coach.

If you have assistants, the drill goes a lot faster with less waiting time for the players. After the first player fields the ball, he goes to the back of the line. Then you roll the ball to the next player who fields in an alligator motion and throws it back. Each assistant does the same with their line of players.

This drill can last for about 10 minutes. The faster the drill goes, the more involved young players stay. You can make the drill more fun by increasing the tempo of the drill, encouraging players to field the ball and throw back to you and your assistants faster.

Ball Toss “Through the Wickets” Drill

This drill stresses the importance for players to be quick on their feet so they can get their body in front of the baseball. It helps young players improve their reaction time and helps quicken their reflexes.

For this drill, no baseball glove is needed. The coach needs a bucket of baseballs. The drill works best when done on a dirt surface such as infield dirt. Avoid grass because it slows down the baseball.

The players form a line, and the coach stands about 20 to 25 feet away from them.

The purpose of this drill is to help players get in front of and properly field a baseball while standing in ground ball fielding position.

Gloves are not necessary, but it would be better if they were used. The coach sets up players in teams of two on the ball field. This drill can be performed on grass or infield dirt, depending on the skill level of your players. Grass makes the ball move slower for beginner players. Partners should be about 10 feet away from each other.

The balls are thrown back and forth for 5 to 10 ten minutes. Coaches observe how well players are performing the drill. When they get good at it, make them increase the speed of the ground balls thrown.

This drill develops muscle memory early in young players. When they are successful at fielding and closing the ball in their glove, then pulling it up to their chest while remaining in position, the repetition of the movement is “remembered” by the body and will be repeated when they are in regular game play. It’s also fun for players when the speed is increased because they are challenged.

This drill is fun for players because it requires them to spring into action and to block the ball with their bodies like a soccer goalie. The drill requires tennis balls and not regular baseballs. The drill improves players’ reflexes and gets their bodies moving.

The Chest Blocking Drill needs to be performed on a hard surface so the ball can bounce in the air.

Coordination and muscle reflexes are developed in this drill, as well as reaction time. Players find it fun, and coaches should always remember to keep it fun and challenging to the players to keep them interested.

This drill helps build confidence in catching fly balls. It also will help kids overcome their innate fear of fly balls. Repetition is key, and over time they will overcome their trepidation. It’s important to use a safety ball for this drill.

A safety ball looks just like a baseball. It is soft and cushioned and is perfect for teaching very young players how to bat and field without the fear of making bodily impact with the ball. In this way, they can focus on improving their fielding skills.

The coach either works one on one with players or partners them up into pairs of two. If the players are in pairs, the coach demonstrates how to throw the fly ball, so that players can imitate the motion. Players will need their gloves to catch the fly balls.

As kids get better catching the ball at 10 feet, make them increase it by increments of 5 feet. The next ball in the series is then thrown at 15 feet, then topping out at 20 feet. 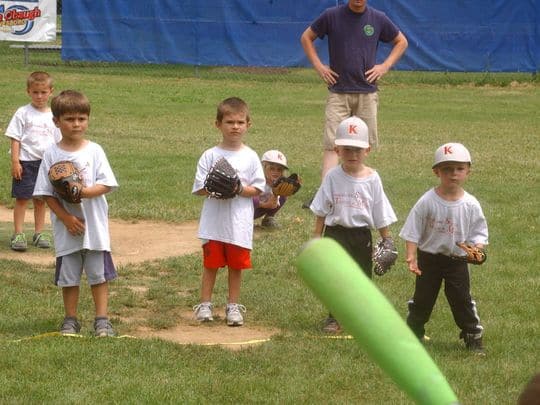 Coaches who perform this drill at each practice, throwing the ball higher each time, will definitely see improvement in his kids’ ability to catch fly balls. Kids have two points of anxiety in baseball: catching pop flies and hitting a pitched ball. Working with them early to give them the confidence catch pop flies with a real baseball, and hitting against a live pitcher, should be every coaches’ objective in tee ball.

This beginner tee ball drill helps players throw the ball farther. All that is required to perform the drill is a cone or another object.

It’s important that player’s arms are already warmed up prior to performing this drill to avoid shoulder or elbow injuries that result from hard throwing. Do the drill towards the end of practice for this reason.

All baseball players, but especially very young ones, find it hard to rebound from committing errors in ballgames as well as practice. Even 4 to 7-year-olds understand competition and instinctively feel peer pressure. They don’t want to be outperformed by anyone, and they certainly don’t want to make mistakes. But they will make mistakes, and when they do, it’s important for the coach to intervene.

What’s of real importance is the next fielding play the player will make.

Ironically, players who are told that mistakes are acceptable without a negative connotation attached will perform better the next time on a play with the same level of difficulty. Coaches that set an environment where mistakes need to be avoided will have a team that commits more errors.

The point is that players already know how to perform plays without errors and that mistakes are a deviation from the norm. Discarding mistakes as being unimportant reinforces their innate ability to make the play successfully next time.

This drill is to help players stop letting balls get past them. It helps improve quickness and builds up reflexes that become muscle memory.

For this drill, players use their baseball gloves. You’ll need two traffic cones placed 10 feet apart. A player stands between the two pylons. Explain that the pylons establish an imaginary line that the ball cannot cross.

The coach then rolls or bounces a ball towards the player. He’ll shuffle from side to side along the line in an attempt to catch the ball. Tee ball level players have anxieties about getting hurt by the ball, so using a safety ball for this drill is a good idea. In that way, players can shuffle and allow the ball to bounce off their bodies if they’re unable to catch it in their glove.

This drill is more about reflexes and improving shuffling motion than fielding the ball in the glove. However, the coach can toss soft rollers that can be fielded with a glove as well as bounced balls that will bump off players.

This drill is designed to help kids position their baseball glove by using a scoop that they can maneuver into the right position. The drill helps improve wrist movement and reflexes.

For this drill, you will need plastic milk jugs and safety balls. Cut out about half of a gallon milk jug so that it resembles a baseball glove. Use about 5 milk jugs if possible, so several players can do the drill while the remaining players watch and learn. After 5 minutes, make a switch so that the players who were watching can now try to catch the ball.

A lot of tee ball fielding practice involves simulating glove work. In this case, milk jugs are a great substitute for actual gloves, which are unwieldy to 5 or 6-year-olds. They don’t think the jug is any different than a real glove, they’re happy just being able to catch the ball. But they develop muscle memory in the process which will be useful when they use real gloves.