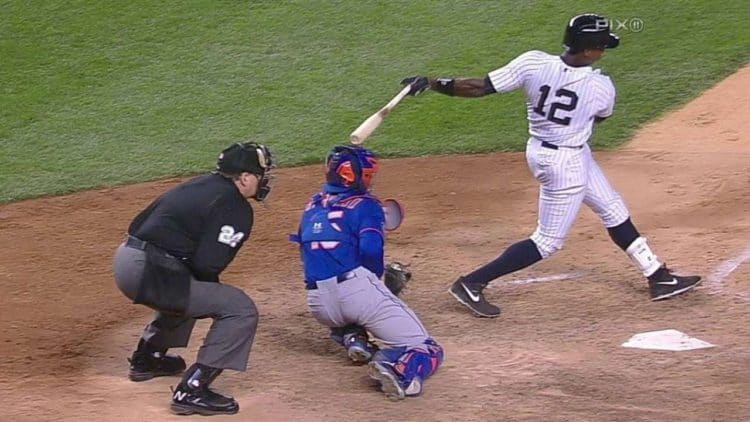 The batter and the catcher play their own game within a game. There have been hundreds of times in baseball history when players intentionally try to either hurt another player or intentionally interfere with players trying to do their job. A batter can be called for interference if he intentionally leans over home plate to impede on a catcher’s ability to make a throw to second when a runner attempts to steal second.

But what happens if the batter hits the catcher with his backswing? If a batter swings and misses a ball and in the process unintentionally hits this catcher on his backswing, it shall be called a strike, and not batter interference. Batter non-interference applies as long as the batter’s feet remain in the batter’s box. The ball is called dead by the umpire and the play is halted. The umpire checks with the catcher to make sure he is not injured. The bat can make contact with the catcher’s head or body, so time is called until the catcher confirms he can continue to play.

How Can A Hitter Be Called For Batter’s Interference?

Can A Batter Be Called For Interfering With The Catcher’s Throw?

Batters can interfere with a catcher’s throw either by design or unintentionally. Interference is usually called when a runner on the hitter’s team is trying to steal second base, but it sometimes happens when the runner attempts to steal third too.

Normally, the catcher has a clear line of sight to second base. When the catcher sees the runner on first bolt to second, he removes his face mask, stands up, cocks his throwing arm with the ball behind his head and rifles a throw to the second base bag, the infielder ready to catch the ball. This occurs in the space of 1 second.

Let us say that the batter swung at the ball and missed and the ball landed in the catcher’s mitt. But the batter’s recoil from the swing knocks him off balance and his foot intentionally steps on home plate. He can even step across the plate.

If a runner is trying to steal second base when the batter steps outside the box, the umpire will call him out, and the runner must return to first base.

Now let us say that despite the interference, the catcher was able to make a precise throw to second and the baserunner was caught stealing and was called out. If this happens, the umpire will ignore the interference, because the catcher retired the runner anyway. The hitter remains at the plate to complete his at-bat.

If there was another runner at base, stealing third base from second, and he succeeds in his steal, the runner is awarded the stolen base. Batter’s interference was ignored as if it did not occur. The runner is out at second and the runner at third is called safe. 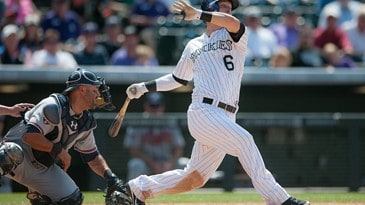 Most of the time in which batter’s interference is called is when a baserunner is attempting to steal third base. If the batter at the plate is right-handed (as 75% of hitters are), he is a clear obstacle to the catcher’s throw.

It is believed by many that the batter’s box is a haven for the hitter, and as long as he stays inside of it he is held harmless from an interference call. But this is not true.

Here is where an umpire must use his judgment because interference is called on a case by case basis. For example, if a runner flies to third, the catcher makes a split second decision to throw. If the batter makes “Any movement that hinders the catcher’s play” he can be called for interference.

The decision the umpire makes is based on whether the batter made such a movement and if he was even aware that the catcher was going to throw the ball to third in the first place.

Plays are made in left than a second and the batter may not have been able to react quickly. Generally, if the batter stays inside the batter’s box, he will not have the umpire make a call against him.

If the batter stays in the box and moves his bat and blocks the catcher, while being fully aware of the throw, he can be called for interference. Again, the call is made at the discretion of the umpire, who has a front row seat to the action and is in the best position to determine whether the batter hindered the catcher’s throw with intention.

There have been umpire calls that make managers jump out of the dugout to yell and threaten umpires. There are other discretionary calls that managers believe were wrong calls.

Imagine there are runners on base, but it is clear they are not attempting to steal. Then a wild pitch is thrown, or the catcher boggles a pitch and the ball goes behind him, which allows the runner to advance to the next base. An umpire determines the catcher could not catch the ball properly due to interference from the batter.

It also happens that the batter catches on and tries to move out of the way to avoid interfering, but as he does, he ends up hindering the catcher’s ability to throw anyway.

The umpire must call interference in this case, even though the batter was trying to get out of the way. Managers go wild at these calls and will dispute the umpire’s decisions futilely. No matter how much the manager protests, the batter is out.

Can Interference Be Called If The Batter Interfered Unintentionally?

The tricky part for the umpire is deciding who to call on the interference, the runner, or the batter. Remember that an attempt to steal home happens in the space of 2 or 3 seconds, and it requires quick reflexes to execute. The batter, runner and catcher must react quickly.

If the pitch is wild or the catcher lets the ball pass behind him, it becomes even more complicated. In this case, the batter is in the box, the runner careens toward home, the catcher runs to retrieve the ball and the pitcher is guarding home plate.

Now let us say that there is a passed ball in this situation and there are two outs. It is easily seen that the batter interfered with the play, either on purpose or it happened so quickly that he simply stood as an obstacle between the third base line and the plate, impeding the tag at home.

Is the runner or the hitter called out? If there are two outs, the umpire will usually call interference on the batter, so that he does not return to the plate in the next inning.

There are times, though when the runner is called out, to make the third out of the inning. If the umpire calls the runner out instead of calling batter interference, the batter will return the next inning for another chance to get a base hit or a home run.

Is The Batter Called Out When There Is Backswing Interference?

Like the previous two situations, the umpire must make a discretionary call when the batter’s backswing hit’s the catcher or the catcher’s mitt, allowing runners to advance. Most likely, the call of interference is made when the bat makes contact with the glove of the catcher and not his body.

When contact is made, the ball is dead, and the umpire calls time, then instructs runners to return to their base of origin. The play is called dead. However, no one is called out, not even the batter. It is simply a “reset” that the umpire calls, the game starts and normal play resumes.

Backswing interference is considered unintentional by the umpire, so in this case, no penalty is warranted. However, in the two earlier situations, even if the batter unintentionally interfered, there is a good chance he will be called out.

Managers do not like hitters to be called out for unintentional interference, especially when their runners do not score. Managers believe it to be unfair because they lose an out and an at-bat for their hitter. If the hitter is on a hot streak and the team is behind, it is even worse because the team and manager are depending on the hitter to get the team back in the game.

Umpires have a thankless job, especially when they make discretionary calls where there are clear cases of batter interference.