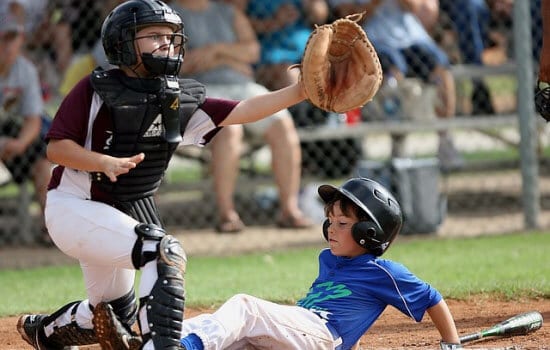 Even though 12-year old players are still pre-teen, they’re already playing baseball at a higher degree of competition.  Field positions are more often than not assigned, but some players are able to play multiple field position. The one position that requires the most time and is the most specialized, is the position of catcher. Having the right equipment, knee guards, cleats and catcher’s mask is crucial, especially the glove he’ll be using pitch after pitch. Catcher’s mitts come in sizes based on the circumference of the glove rather than its length. A catcher fitted with the right sized glove will perform better and with greater consistency.

So, what size catcher’s mitt should a 12-year old use?

A 12 year old’s mitt should be within the range of 32 to 32.5 inches in circumference. Players 12 and under will require a mitt of 32″ or less, while a player 13 or older will usually require a catcher’s mitt whose circumference is 32.5″ or more.

But there is more to consider than just the circumference of the catcher’s mitt when choosing one for a 12-year old player. The role of catcher on the defense is often considered the most important because of the greater responsibilities catchers assume. To play at the highest level, catchers must be able to perform the following.

Blocking, hand signaling, avoiding passed balls and even hiding the baseball properly requires a good, durable glove. Since 12-year olds are still growing, it is likely they will outgrow their catcher’s mitt in two years; however, because the mitt is based on the circumference and not hand size, it can be in service for longer. Parents may consider purchasing a less expensive pigskin leather glove or a synthetic glove for this reason, but it’s important to know the differences in catcher’s mitts before making the final purchase.

Differences Between a Baseball Glove and a Catcher’s Mitt

A typical baseball glove has separate pockets for each finger of the hand, and this feature lets fielders snap the glove open and closed during throwing and fielding plays. A catcher’s mitt, on the other hand, does not have separate finger pockets because it’s designed to keep the fingers close together, touching, to ensure the ball lands directly in the mitt’s deep pocket.

A catcher’s mitt is designed, even more than a regular baseball glove, to catch the baseball and hold it in place. It is crucial that the catcher not let the ball slip out of the glove or get past him, especially when there are runners on base.

A catcher’s mitt is more heavily padded than a baseball glove because of how much more speed with which pitchers throw at this age. Without extra padding, each time the ball is caught the catcher will feel repeated stings of pain in his hand.

The webbing is closed and tightly woven on a catcher’s mitt compared to the looser and more open webbing of an infielder or outfielder’s glove. This ensures the baseball not only stays in place but also helps conceal calls made to the pitcher from the opposing team.

Catchers will usually opt for the closed-back feature rather than the open back of gloves used by the rest of the players on the field. The closed-back provides more wrist support and protection. Some catchers prefer an open back, allowing for more hand movement inside the glove.

A lot of models also feature a finger slot, allowing the catcher to keep his index finger outside of the glove for increased movement and control of the mitt.

How Do You Break in a Catcher’s Mitt?

Parents of 12-year old players can choose to purchase a less expensive catcher’s mitt because their child has either not committed to playing the catcher position for more than one season and that he will outgrow the glove. In these cases, a pigskin leather mitt requiring minimal breaking-in time and ready for use in a few hours. The best way to break in soft pigskin leather mitts is to use it in practice in the catcher position. Playing catch with a pitcher who can throw fast pitches is the best way to ensure a full-functioning catcher’s mitt.

Traditional (but still the best) tougher leather materials on a catcher’s mitt (steerhide or full-grain leather), will take longer to break in completely. 12-year olds who decide on the tougher leather glove should have the glove at least a month before the start of the season to allow him time to break the glove in fully.

The best rule of thumb for breaking in a catcher’s mitt properly is to play catch with it, over and over. In time, the glove will form to the hand of the player and be ready to use in gameplay and practice. When not in use, place a baseball in the pocket and wrap a belt or a flexible leather strap around the mitt to keep it tied overnight.

Don’t ever run over a catcher’s mitt, or add a lot of unnecessary oils to it, or hit it constantly with a bat in an attempt to soften the leather. This will only result in a flat, beat-up catcher’s mitt that will need to be broken in all over again to fit the hand properly.

How Long Should a Catcher’s Mitt Last?

During my years of coaching, I conduct drills in heavy rotation for the entire team. For younger players, I place hit to every position with a fungo bat from home plate. I set the pitcher and catcher in foul territory on the field to work on their own, going through the pitcher rotations. The duo works on calling pitches and pitching accuracy.

I make the assumption that the catcher will be there and do his job supporting the pitcher and, at times, directing the pitcher’s actions. Ironically, though this makes the catcher’s job the most important on the field, I tend to pay the least attention to him. But as one season ended and another began, I began paying more time to the catcher’s own needs and the gear needed to perform his role behind the plate to the best of his abilities.

As a coach, I always prefer the catcher have the best catcher’s mitt because I rely on him to block, catch and throw automatically. The worst is when a catcher needs to compensate for a poor catcher’s mitt because not only does it make him less able to carry out his crucial function as team captain, it makes his job much harder and much less enjoyable for him.

If parents purchase a glove made from the toughest, and most durable leathers, like steerhide or full-grain leather, the glove can be counted on to last two seasons or more. While this is also the case form softer pigskin leather, these kinds of gloves will begin to wear out more quickly and begin to perform poorly the more they are used. Gloves of tough leather will maintain their same level of functionality over the course of two years.

Sometimes I rotate catchers on my teams, so each player can try out other positions and improve those skills. In this case, a softer pigskin glove will do the job.

This is why it’s a good idea to talk to the 12-year old player as well as his coach before the season begins, to determine the depth of the player’s role as a catcher. It’s a good idea to ask the coach what he believes what kind of catcher’s mitt 12-year old should wear. Coaches, who are themselves on a budget, are aware of the cost of baseball equipment and can usually be relied upon to give you the most economical suggestions.

Although coaches like me lean towards more competitive play, I realize that top priority goes to the player’s enjoyment of the game. I strive to build a love for baseball in each member of my team. This is why sizing and fitting the catcher’s mitt is so important, because the better the glove fits, the better the catcher is able to play well and compete and enjoy his crucial importance in the game.