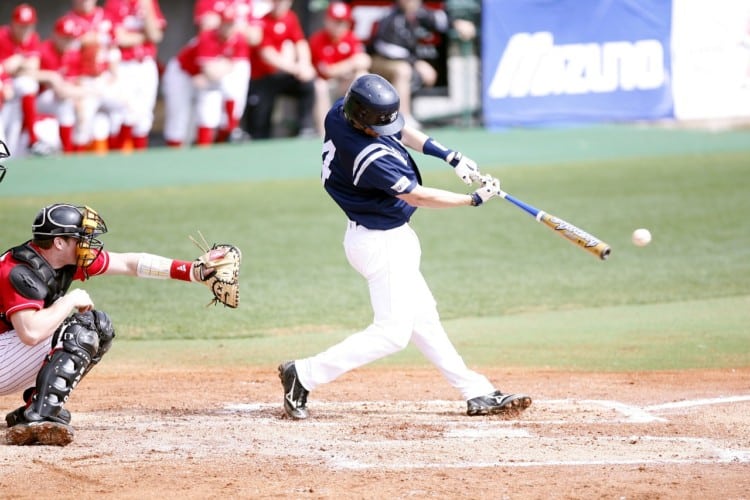 Besides talent, are there distinct advantages one baseball team has over the other? Baseball pundits have long argued home field advantage. Another way to ask the question; Which team bats first in baseball? Does that element influence the outcome of the game?

The visiting team always bats first and bats at the top half of every inning.

The beauty of baseball is not just the thrill of a home run or turning a double play. A fan must recognize the nuance and history of the game, to enjoy a full nine innings.

History of Coming to the Plate First

The visiting team batting first has not always been the de facto standard. It wasn’t until the early part of the 20th century when officials required a visiting team to bat first. Before that, teams had the choice. Home teams saw batting first as a tactical advantage. A calculated example, confounding the opposing pitcher in front of a rambunctious crowd.

As time wore on, managers saw enhanced strategic value to batting last in the final inning of the game. A last chance to score far outweighed any short-term benefit realized by batting first.

Franklin Lowenthal and Stephen Shmanske, researchers at California State University, considered any advantages a team has batting first in the inning. The two found, home teams won a majority of the time, but not by an overwhelming margin. In fact, visiting teams which played on neutral fields multiple times had a higher winning percentage such as the College World Series.

Theodore Turocy, a baseball fan specializing in game theory says; home teams win more baseball games, not because they bat last. They win because the team is comfortable in their home surroundings.

Neutral park games in Major League Baseball, officials decide beforehand who the home team will be, usually by a coin toss. There are occasions where a visitor is considered the home team and will bat last. For example, when the game is moved to the visiting team’s ballpark, for non-baseball reasons.

Home Field and the Postseason

Is there a home-field advantage in baseball? Yes and No. In all games, including the playoffs, home teams have a .550 winning percentage at home and .450 on the road. Since 1903, only seven teams have compiled a .700 or better winning percentage. The Seattle Mariners accomplished the feat in 2001 at .716.

Most fans of the game assume, having home field advantage throughout the playoffs means the club is headed to the World Series. Not so fast. Jason Catania of Bleacher Report conducted a non-scientific investigation in 2013, measuring how important home field was to teams in the playoffs. From 2003 to 2012. Home teams won only 51% or 37 out of 70 series.

There is an unquantifiable factor that says, home field is an actual advantage and not just in the fact they bat last. According to Chris Gorski, editor of InsideScience, home teams lead visitors in every statistical category.

However, contrasted to other major sports, the advantage in winning is smaller. There are reasons for this anomaly; most assert it is the age of specialization.

Home teams organize their defense, pitching, and offense to match their individual fields of play. Visiting teams can now carry out the same matching and specialization, thanks to player data and analyzation. Shrinking any advantage, the home field may have.

Every team shoots for home field in postseason baseball. If a team is a contender for postseason play, the objective is home field throughout the playoffs. In a brief five game series every at bat, hit and pitch count is exaggerated. Visiting teams who are up to the challenge can change the momentum quickly, by scoring a few runs in the top of the 1st. Baseball is a game of momentum, strategy, cunning and putting the other team on their heels.

With any sport from pee-wee leagues to the majors, there is no comparison for a player’s sheer acceleration. A speedy leadoff hitter disrupts everything the other team looks to achieve. The opposing pitcher must be mindful of the runner inching toward second. The defense must change their immediate scheme for that one player.

Taken on face value, 30% is just another statistic. However, baseball is built on tradition, breathtaking accomplishments, and statistics. Knowing the influence of scoring runs in the first inning, managers construct their lineups to take advantage of this dynamic. The home team has multiple advantages. The savvy visiting manager knows his players and the competition. Putting runs on the scoreboard in the first inning often can mean a win.

Lead-off Hitters and the Batting Order

It is the top of the 1st, and the leadoff hitter is strolling towards homeplate. A typical leadoff, batting at the top of a lineup is one of the most potent hitters on the team. His singular goal is to reach base, no matter how he does it.

Big-league hitters possess top-flight athletic qualities. Batting leadoff, a player should have a high on-base percentage, bat control, and excellent acceleration. Stealing bases, previously a pre-requisite to the position, in recent years has given up some of its luster.

The manager sets up the batting order in such a manner, the four best hitters and sluggers come to the plate as often as possible. In early times of baseball, there was no set order on who came to the plate. Any player not on base could bat. It was not until the early turn of the century that clubs were instructed to declare a set batting order.

Baseball is a game of speed, control, power, and strategy. Each team has an advantage and disadvantage when they bat in their half of the inning.

What Teams do Fans Want to See the Most?

Baseball fans are rabid followers of their local franchises. A devoted fan base will show up to the ballpark, no matter who is playing. However, baseball fans are just like any other. They want to see the best players on the strongest teams. SeatGeek compiled a top five list of the most popular visiting teams, by the increase in ticket demand.

Another excellent piece of baseball trivia: The Chicago Cubs increase ticket demand by 67% to any stadium they visit, far eclipsing the other four teams.

How important is home field in the playoffs? Of the four major sports, NFL, NHL, NBA Major league baseball derives no playoff bump. The crowd, ability to bat last and other considerations do not increase the winning percentage. Early in the playoffs, home field is less of an advantage.

Who was the most colorful character in baseball? This list would never end if time allowed. John “Mugsy” McGraw, a member of the Baltimore Orioles from 1894 to 1896 had a win at all cost’s mentality. In the early years of baseball, outfielders would hide balls in the grass and runners stole home from second base. Mugsy played third base and would hook his finger in the opposing player’s belts when the umpire was not watching. Holding onto jerseys was another trick. Standing at only 5 feet 7, Bugsy would spray tobacco juice on balls while arguing the play.

Experts consider home field the ultimate advantage with any sport. In the modern era of competition, athletes have become bigger, faster, and smarter about the game they play. High school athletes are showing up to the big leagues ready to challenge veterans. Plenty of baseball players have phenomenal athletic talent. Few understand and study the intellectual side of the game.

If your team makes it to the playoffs, batting last would be a clear-cut advantage. Or would it?