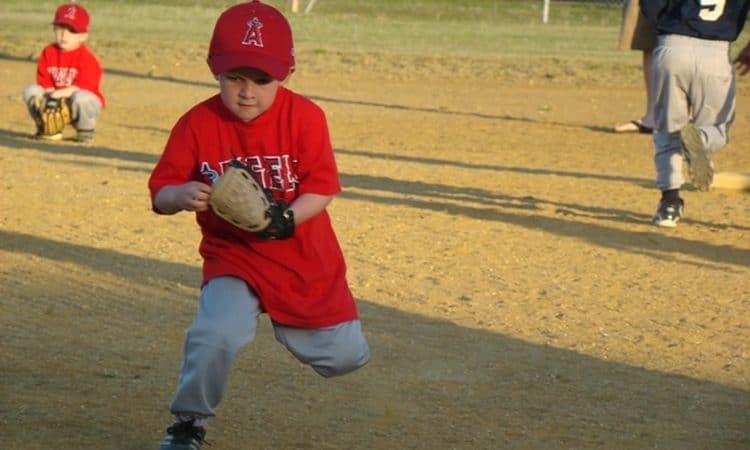 Young boys and girls begin to get involved in organized baseball between the ages of 4 and 5. At this age, they know little or nothing about the game of baseball. When they watch players running around the field, hitting fielding, throwing and running, there is a spark of interest in them because it looks like a lot of fun. Coaches can develop the necessary skills in their young players by doing these 8 incredibly fun tee ball drills with their novices. 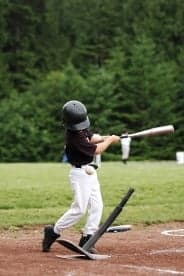 Five-year-olds aren’t ready for strict discipline or regimentation. They want to enjoy themselves in everything they do. When they think of hitting a baseball, they assume that batting only uses the arms. After all, the arms are swinging the bat. But we know as coaches that it’s the legs, in fact, that have the most body mass and are responsible for good, powerful swings.

Most kids are phobic about catching fly baseballs. So we work to make them break through the fear of getting hurt through catching repetitions.

Finally, throwing is like hitting in the sense that the legs are really responsible for good throws. Drills should be like games for tee-ball players, so let’s take a look at some fun drills that they’ll love and will also instill the skills needed for success playing competitively later on.

This drill involves the whole team, and it’s a fun way to get your players throwing more accurately. At this age, body mechanics are still undeveloped, so learning to throw a ball accurately will take time. Coaches should exercise patience, but they should also remember that if they repeat drills like this one at every practice, they will definitely see their players throw better and with better precision.

This drill needs to be performed near a fence. Coaches should also have an assistant to manage half of the team. You can get all of these for some great prices on amazon. Click the links to check them out. You’ll need:

Because all drills for tee-ball players are games, you’ll need to keep score of this fun competition.

If it becomes easier for players to hit the target at 7 feet, moves the cones back a foot and keep the game going. You can even make the first and second round of the best of five at 7 feet, and make later rounds at 8 or 9 feet to increase the challenge and the excitement of the game.

This is another fun drill, though not actually a game. But tee ball players have the chance to run around the field and become more familiar with the 9 different field positions, getting to understand why the defense is the way it is. 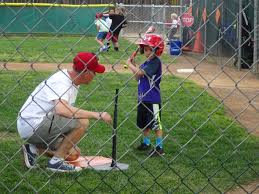 A baseball field is required for this drill. It can be a smaller little league field. The drill can be performed in 15 minutes or less. You will need to have at least 2 assistants to help manage players’ movements around the field.

In addition to the three zones, there will be a player at the plate or set up near the pitcher’s mound with a batting tee. This drill not only helps young players understand the different playing positions but also gives them a chance to field balls hit by the batter.

Divide the players into three zones.

Use either a tennis ball or a soft sponge ball. Coaches can bat themselves, making sure the ball is hit to the zones they want the ball to travel to, and they can rotate. In other words, the first batter can be the coach who place hits the ball to each zone, followed by a tee ball player using the batting tee to hit the ball. This rotation of coach to the player at bat is preferred because it creates the element of surprise for the fielders in the zone whenever the tee ball player comes to bat.

Repeat the batting sequence, which is three batters go to the tee and hit the ball. If you want the tee ball hitter to place hit, you can adjust his position at the batting tee. For example, if you want him to hit the ball towards the left field side, position his body so that when he swings off the tee, he will hit to the left side of the field.

After zone changes, make sure each player resumes ready position to field the ball.

Ready position for fielding is:

Each of the three zone coaches should keep an eye on the players to make sure they stay in a ready position and are focused on the batter. The coaches will have the players call out to the team to tell them where he is going to throw the ball after he fields it.

Lastly, if you hit the ball to Zone 1, for example, or if you have the batter positioned at the tee to hit the ball to this zone, the two other coaches for Zones 2 and 3 can throw a ball to each position, playing catch with them to keep them engaged.

Add a catcher, who will stay in this position during the drill. All fielders can throw the ball to him after making the catch.

Running the Bases Drill Round 1

This is a simple drill that is a great exercise for players and keeps them involved while they learn the names of the bases.

Coaches will need four bases designated as first base, second base, third base, and home plate. It is best if the drill is performed on a baseball field, and the bases are placed in the respective infield positions.

Running the Bases Drill Round 2

Immediately after rounding the bases and each team member calling out the base name, the players will line up again at home plate in a straight line.

The two coaches, at first and third base, are holding baseballs. If the player runs past the base, the coach tries to tag him out.

This is another drill that involves the whole team. This time, they’re running in left field, center field and right field and becoming aware of the name and purpose of the three outfield positions. 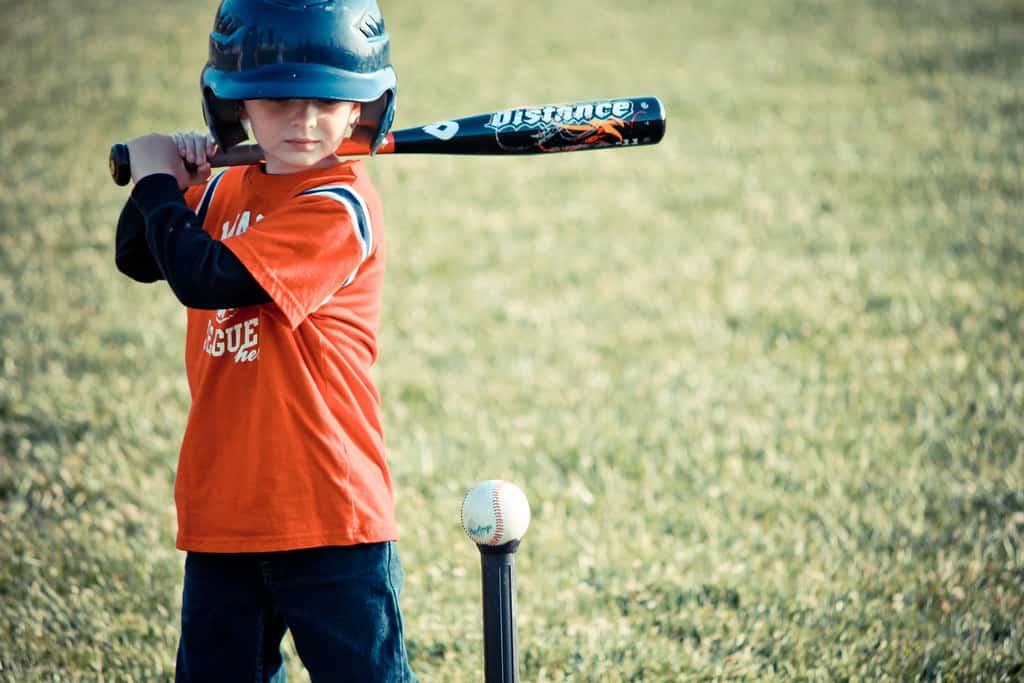 We mentioned earlier that kids assume it is only the arms that are used to swing the baseball bat. During their tee ball experience, it’s a great time to teach them that they don’t swing a bat with their arms.

Gather your team near home plate. It is best if you have two or three assistants (parents can be involved), as well as three batting tees.

With the players around you, talk about the three elements of swinging a baseball bat as simply as possible. The best way is to demonstrate after speaking only a sentence or two at a time. Remember, this is play, not school.

You are trying to teach the three elements of swinging, which are stance, stride, and swing. After informing players that they are really swinging with their legs, walk to the batting tee and get into a batting stance.

You will be moving into your stride next. But before you do, tell your players that “your legs swing the bat.” Players need to have demonstrated to them by you that the real power in a swing starts in the feet, moves up the legs and thighs, followed by the hips, then the shoulders and finally the forearms and wrists.

Have your players bend and place both hands over a foot, then have them move them hands in front of the bodies, up their legs, hips, then shoulders arms. Having them do this helps them remember. Pretend it’s a kind of calisthenics exercise!

Last is the swing itself. The coach holds a bat, and there is a ball on the batting tee. The players watch you in slow motion swing the bat level towards the baseball. Point out that your wrists are actually moving the bat.

Showing these steps in slow motion, having the kids start with their hands at their lower body then moving up cement the fact that the feet and legs are involved in swinging before the upper body.

At the stations, have the players take slow swings first. The coach and each assistant at their station study the players swinging and correct their movements along the way.

When the stance, stride, and swing of one player are correct, have him approach the batting tee and take a swing at the ball. Use tennis balls first. You can change to an official baseball after the swing mechanics of the players are perfected.

This is a fun drill for tee-ball players and helps them to improve their throwing accuracy. For the drill, you’ll need tee balls and a bucket.

Players form a circle around a bucket. The coach determines the distance based on his understanding of his team’s throwing skills.

Each round is a maximum of 11 points. In the next round, move players back two steps or about 2 feet. They repeat, with the hit bucket 1 point and getting it in is three. But the farther away from the bucket they throw, the higher the point value.

So, if your players are 10 feet away, hitting the outside of the bucket is 2 points, and getting it in the bucket is five points.

Established 3 rounds, and the first player to score at or above 33 points is the winner. He gets the first choice of the candy the coach or a parent assistant has brought to practice.

Having assistants at each practice will make the drills fun and exciting. It’s easier having friendly competitions and keeps it better organized when coaches have help.

Rewards like candy or anything else a coach can imagine as a prize will highly motivate your players. Remember also that each drill is a game, and always keep the practice in a light mood.

At the end of each practice, place markers or cones at each of the 9 playing positions.