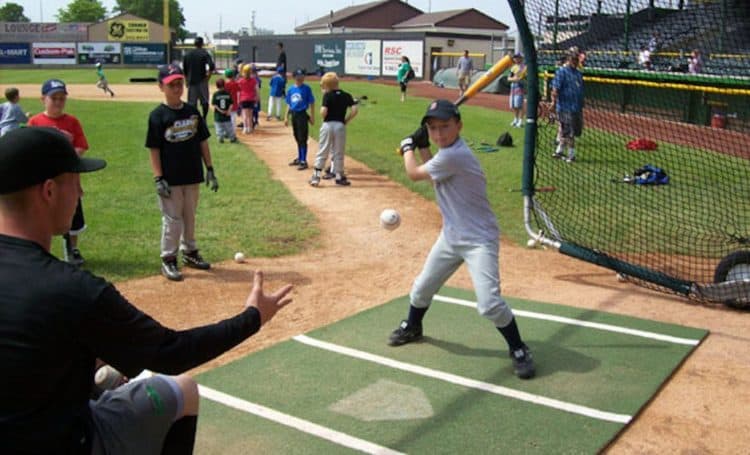 It is often said that good coaching produces skilled players. The better the coaching, the further players will go. The key to developing great player skills is knowing how to perform drills that will not only improve performance, but are also enjoyable to do. Good hitting starts when players are young, and coaches are strongly advised to use wiffle balls as part of their young players batting practice regimen. Here we present 5 Wiffle Ball Hitting Drills that will encourage coaches to improve their coaching and help their players to be better hitters.

There are many advantages to using a wiffle ball for youth player batting practice. The main advantage is control of the baseball when pitching it in to the player. Batting tees are great to improve swinging mechanics, but pitching the ball into a player’s strike zone teaches him to follow the ball as it approaches. Eye contact when batting is critical for power and ball control when swinging.

The drills listed here can be done sequentially in the order presented so coaches can plan their practices in this order. Wiffle balls are inexpensive and come in a golf ball size as well as the official 9 inch diameter ball. They also come in different weights. A dozen golf ball size balls is less than $3.00, and are useful for accurate zone pitching and for hitting the ball farther.

A Note to Coaches for Throwing Wiffle Balls during Drills

This drill helps hitters improve their inside swing. It is highly recommended that for this and the two drills that follow, coaches use the golf ball sized wiffle balls.

This drill is easy on the coaches’ arm. He is situated about 15 to 20 feet away from the batter, and he is kneeling on one leg and throwing underhanded to the batter’s box.

Take a bucket of about 2 dozen small wiffle balls and set down about 15 feet away between home plate and the batter’s box. The player comes to bat using either a BBCOR or wood bat, if they are available (preferred over aluminum bats because of the lightness of the wiffle ball).

The coach aims his pitch to the hitter. He tells the batter he is going to throw inside pitches. The coach watches the hitter’s stride and swing to make sure his body is striding and swinging in a fluid motion.

When the player swings, bend your head down to avoid getting hit. It’s a great idea for coaches to wear batting helmets for this drill. Although the wiffle ball is harmless, it can still sting if the angle of the ball is just right.

What’s great about wiffle balls is that strikes can be thrown every time. There is nothing better to improve a hitter’s technique than hitting balls thrown accurately on the inside, middle and outside of the plate.

Throw about 5 balls in a row on the inside of the plate, followed by 5 pitches on the outside of the plate, and finally 5 throws down the middle. Encourage the batter to swing only when he thinks the ball is good to hit.

If you have other coaches or parents to help you with this drill, you can set up three stations with three or four players at each station. Pitching 15 balls to each batter takes less than two minutes, so players don’t spend a lot of time waiting for their turn.

The wiffle ball Hitting and Fielding Drill is a more fast paced drill. In this drill, two batters will be hitting in tandem and will involve fielders who will retrieve the balls that are hit.

Like the previous drill stations can be set up. Each station will have one coach, two batters and two fielders.  Kids love this drill because it tests their reflexes. The fielders must always be in alert mode because balls will be hit to them literally seconds apart from each other.

A baseball field is not required for this drill. However, if you do have access to a field, you can set up either at home plate or in the outfield, where fielders will have to retrieve fly balls that are hit to them.

You can have three stations, each copying this exact setup. Coaches also test the batters, throwing inside and outside pitches, high and low in the strike zone. The fast paced nature of the drill keeps batters on their toes as well as fielders.

A batter is allowed to let bad pitches go past him, and is encouraged only to swing at pitches in the strike zone. The more wiffle balls coaches have at the ready, the longer the momentum will last.

For this drill, coaches will have hitters use a lighter and thinner bat. These are available at most sporting goods retailers. Here is the link for the Skilz Quick Stick bat. (Best Price on Amazon)

This is a one on one drill. Using assistant coaches and/or parents is a great idea, so the whole team can get involved.

Coaches should encourage parents to do this wiffle ball Rhythm Drill at home.

Coaches stand in front of the player at a 45 degree angle from the hitter.

Using a wiffle ball makes the drill more challenging than a regular baseball because of the faster speed of the approaching wiffle ball. The drill can be used for youth players as well as more experienced hitters.

This drill helps build forearm and wrist strength in hitters. The player can stand anywhere on the field.

The coach is looking for quick reflexes in the hitter. The bat should “snap”, and the movement of the heavier bat should be initiated at the forearms and the wrists.

There are several ways to make a bat heavier. Many people have drilled a hole in the knob of the bat and then pour sand in the hole. Another, easier way is to wrap a good amount of duct tape or gorilla tape around the bat’s barrel.

In the drill, the batter olds the bat out in front of his body. Next, the barrel of the bat goes to the top of his head. This is accomplished by the hitter bending his wrists. Immediately after this, the batter “snaps” the bat back into his starting position.

Once the movement is sharp and crisp, lob 10 wiffle balls for the batter to try and hit, using his forearms and wrists. Because of the strain on the wrists, the hitter shouldn’t try more than 10 repetitions at a time.

Tee ball hitting is an excellent way for baseball players at all levels of expertise to correct and perfect their body mechanics.

There are three basic elements to hitting a baseball properly.

In this drill, coaches place the batting tee at thigh high level in the center of home plate. The player takes 5 swings.

Next, the coach moves the tee in closer to the hitter to simulate an inside pitch. The player takes 5 more swings. 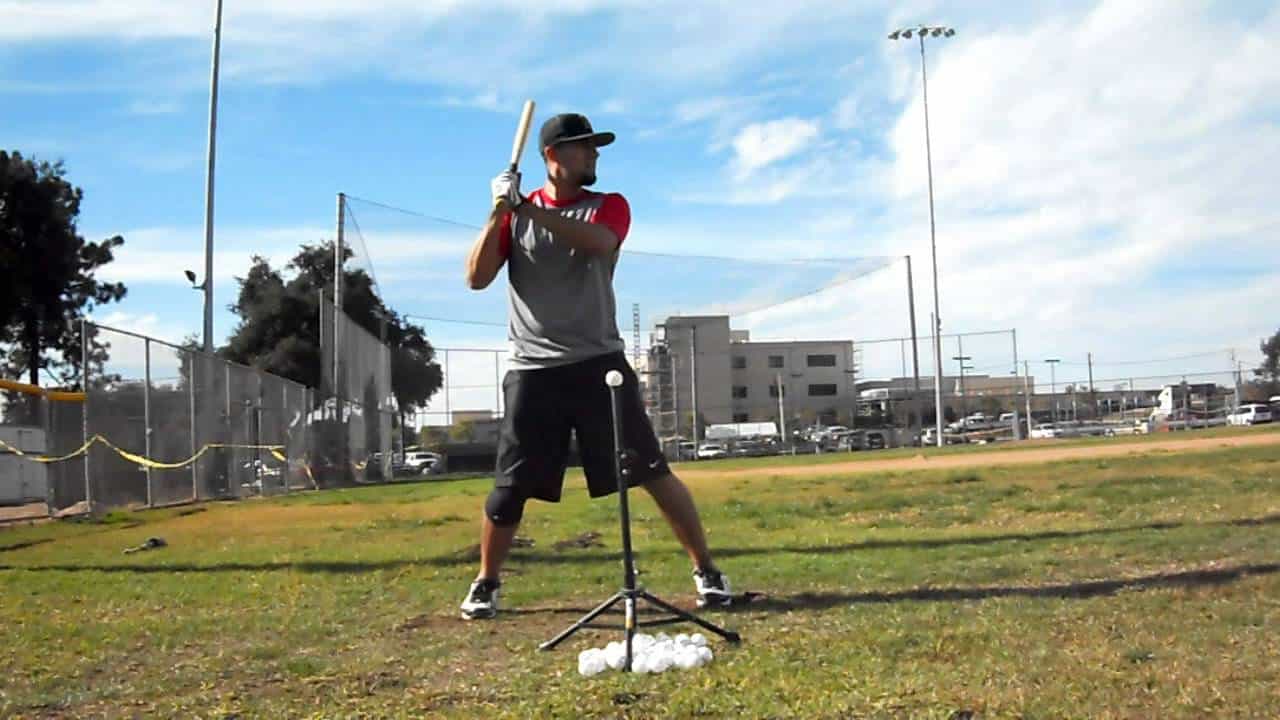 Now the coach moves the tee to the outside of home plate. The hitter takes 5 swings at the outside pitch.

This drill moves to the next level, where the batting tee is next moved waist high. The player does 5 swings down the middle, followed by inside and outside pitches, 5 each.

This drill mostly focuses on eye contact, yet his swinging mechanics (stance, stride and swing), should be at its most perfected level. When body mechanics are in place, the hitter can focus on his eye contact.

Wiffle balls used on the batting tee will move in unusual directions when hit. The batter thus has less control of where the ball will go when he hits it. He can improve the direction of the wiffle ball through repetition. Batting tees, combined with a net will allow players to put in long practices at home. They can have a partner adjust the batting tee so they can practice inside and outside pitches, as well as pitches high and low in the strike zone.

This drill also involves a batting tee. Players should use underweight bats for this drill.

Using a wiffle ball challenges young players to place a bunt where they want it to land with a lighter, plastic ball. Because it is a wiffle ball, they will often need to overcompensate in order to improve their bunting accuracy.

Coaches place a wiffle ball on the batting tee. Next, he instructs hitter to bunt the ball, first down the third base line. The player has five tries.

Following this, the player is instructed to bunt the wiffle ball down the first base line, having five tries.

Lastly, the coach instructs the hitter to place the wiffle ball at a specific spot in the infield, either on the third base side or the first base side. He has five tries at this for a total of 15 attempts to bunt the wiffle ball.

The next player comes up. The coach places the wiffle ball on the tee and repeats.

It’s a great idea to have three stations, each with 3 or 4 players at the batting tee. Using assistant coaches or even parents will make the drill move quickly.