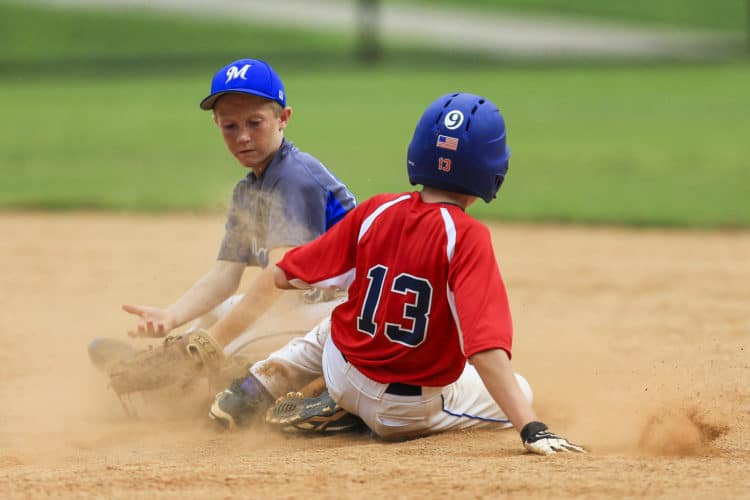 As players enter their teenage years, many of them have been playing for about 6 or seven years, and others are novices, just starting in the game. A year or two after age 13, the distance between the bases becomes the official90-foot distance, while the distance between the pitcher’s mound and home plate moves out to 60 feet. 13 years old is the time to prepare for regulation baseball, and these 8 baseball drills for 13-year olds will help players improve their reflexes, reaction time, and power in hitting the baseball.

These drills are designed to be played at either a shorter distance between bases or at the regulation distance. The sooner 13-year olds are able to play at the official distance, the better prepared they’ll be for competitive baseball.

Players will be faced with many different running situations in gameplay. They could be on base alone, or there could be a runner ahead of them in scoring position. There could be two outs with a runner on first and third and the coach will call for a suicide squeeze. They could also be in a steal situation at first base and will attempt a steal by studying the pitcher’s movement as he winds up and throws.

This drill serves to condition the runner and help him improve his body mechanics to run fast within the base path. He can also work on the different base running situations described above.

The coach will be at home plate, using either a regular bat or a fungo bat for place hitting. He will also need an assistant at the third base line to instruct the runner.

The coach hits the ball from home. All ground balls or pop flies are assumed to be base hits.

This drill helps players hit the ball as a moving object, rather than stationary baseball on a batting tee. Besides swinging mechanics, developing good eye to hand coordination is key hitting for power and speed. It also helps to hit the ball with greater accuracy.

For this drill, coaches will need a batting tee, tennis balls or tee balls, and an assistant coach to soft toss, and a net.

It can’t be emphasized enough how important repetition is in a sport like baseball. Basketball is another great example of how the repetition of the same play improves skills. A basketball player practices his three-point shot by remaining in the same position on the court and repeating the same exact throw from the same angle repeatedly until he sees a slight improvement.

Baseball is the same. Soft tosses thrown one after the other at the same speed and from the same distance will guarantee there will be improvement of that exact play. When the tosses are low and thrown repeatedly, the players’ eye is able to follow it and begin to master hitting it.

Great practice for young players is to work on their swinging motion. A swing involves the opposite elbow of the arm that holds the bat. Establishing a balanced swing, with the elbow bent will dramatically improve a young bitter’s swing.

This drill requires a coach to soft toss to the hitter. You’ll also need a bucket of baseballs. There’s not a safety issue in this drill for the one who is tossing since he will be on the side of the hitter.

A one-handed bat is also required for the drill. These bats are thinner and lighter than regular bats and are helpful for swinging with one hand gripping the bat.

In this drill, the coach tossing, and batter assume the same position as the Lead Hand Drill above. The difference is now the batter holds the one-handed bat with his right hand.

By practicing hitting with the left arm followed by the right arm develops balance and forces batters to focus more on the baseball, further developing eye to hand coordination. It shows how critically important the eyes are to hitting for speed and accuracy.

Throwing drills can’t be overemphasized. It’s often said that great defense wins games. When the infidel works like a well-oiled machine and each position player is at top form, it’s hard for the opposing team to score runs, even if the opposition has fast runners and good base stealers.

For this drill, you’ll need a minimum of 5 players but can include more if you’re creative as a coach. You’ll also need a bucket and baseballs, and you as coach with a fungo bat at home plate.

Position your players at the 4 infield defense positions and a catcher behind home plate. You’ll want to keep track of errors, so count the balls that will be used in the drill before hitting to the infield.

Place baseballs near you at home plate and keep the bucket outside of third base.

Keep track of any errors made. If an error occurs, the third baseman will leave the ball outside of the bucket. The objective is to have no errors from any position as you go through the infield rotation.

Coaches can have players change position. For example, after hitting around the horn to each player three times, you can alternate by having the third move to first, first move to second, second to short and short to third. Then begin another three sets of hits to each infield position.

Infield Around the Horn Drill

This drill is performed without the coach hitting grounders to the infield. Instead, the players themselves practice fielding and throwing in order to throw out base runners at each base throwing to each other and covering their bases.

You’ll need to have the entire infield take their positions at third shortstop, second, first and catcher. They can work on this drill alone, a total of five players. The coach can take the rest of the team and have them practice either running or batting practice.

At 13 years old, players are beginning in play assigned positions. Defensive players a become better throwers than others on the team and may end up playing third base.  Another may have quick reflexes and can backhand ground balls better than others, so would play well at shortstop. A left handed player can stretch and field grounders better and will become a first baseman, and so on.

Rotation players in this around the horn drill helps coaches determine how to create his best infield based on individual payer skills. It’s great to rotate players and observe their reflexes, throwing and catching skills to find the best fit for each player.

Call for the Catch

For this drill, you’ll need an assistant coach as well as yourself throwing fly balls to the outfield from both the first and third base lines. You’ll each need a few baseballs to throw and keep the momentum going. 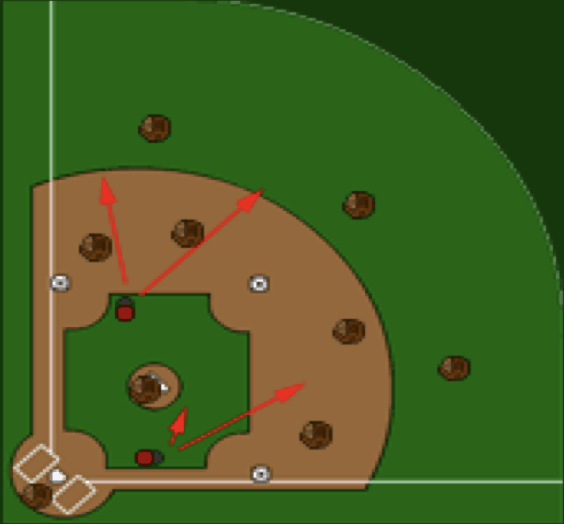 As can be seen in this illustration, the coach positioned near first base throws a fly ball between the first and second baseman. The center fielder and the right fielder also watch the fly ball to determine whether it will come to into their zones. The first or second baseman calls for the catch. 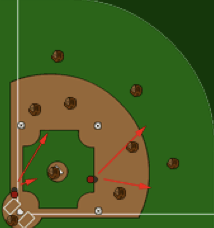 Now the coach along the third base line moves in towards home and throws a fly ball between third and shortstop. These players determine who has the best play.

Next, he makes an infield throw between the pitcher and catcher. The catcher removes his mask and runs towards the ball and one of the pairs makes the catch.

The coach on the right side of the infield throws between center and right field. The second baseman moves back and tracks the ball, and the call is made between right, center and second base.

Next, he throws a fly ball in shallow right field, and the first baseman and right fielder parry for the catch.

This drill incorporates the entire infield and vastly improves the learning curve for players in their position relative to a fly ball. The drill also helps improve safety and helps avoid collisions that can lead to significant injury to players.

Lastly, the drill helps each player to track fly balls better. Outfielders move forward, their eye always on the ball, and infielders step backward tracking the ball as well. Over time, an infielder will know when to get out of the way because the outfielder has the better play on the ball and vice versa.

A batting tee is always useful for baseball players no matter what their age or experience. Hitters can always improve their swinging mechanics, and there’s always a need to work on eye contact. When the ball is stationary, the batter can focus on his stance, stride, and swing and watch the results when he contacts the ball.

For this drill, you’ll need a bat, helmet and a batting tee. You’ll want an adjustable batting tee that will be set thigh high for the first set of swings.

Have players in their positions in the infield and outfield. If the practice has exactly nine players, you can rotate and leave one outfield position open. So, the first hitter at the plate with the batting tee will be the right fielder. The second baseman can playback as an option. Next hitter would be center field and so on.

The series should be as follows:

Move to the next player. The hitter now returns to his place in right field.

Make sure each player has a turn at the plate. The drill will move fast and should take no longer than 15 minutes to complete. Coaches can even mix real pitches into the drill. After every player has hit off the tee, players can apply the drills they practiced as listed here and hit off pitched balls, simulating throwing runners out at bases, and calling fly balls.