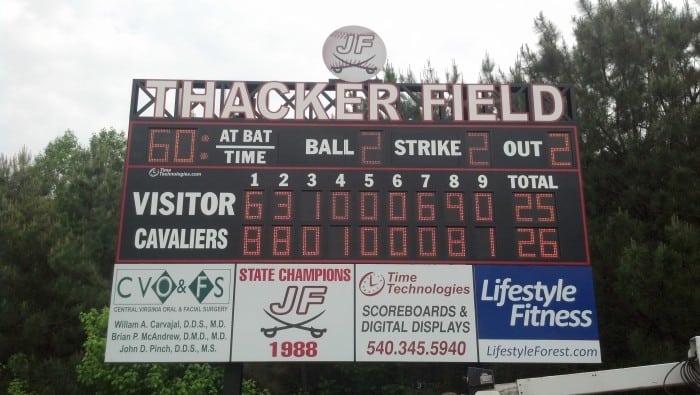 The rules of the game of baseball we are familiar with today came about after a great deal of trial and error. In the beginning, there wasn’t a game clock or an agreed length for each game, nor was there an agreed number of players on each team. As more and more teams were formed to compete in the new sport, much arguing and passionate debate led to the establishment of some basic important rules, like the amount of innings each game should last.

So, why does a baseball game have 9 innings? 9 innings were agreed as the total amount of innings played per game in 1857. Before this, the rule was the first team to score a total of “21 aces” (runs) in the game would be the winner. Games were usually six innings long. The total innings played was equal to the number of players, so if 14 men showed to play, the game would be seven innings long, or whichever team was the first to score 21 runs.

At the beginning of organized baseball, it was typical for teams to score a combined total of 60-100 runs per game.  Baseball early on was really about hitting the ball and fielding it, and the role of pitchers was secondary to batting, much like cricket, its predecessor. But that would soon change as pitchers improved, and with it, 9 inning games were established as the length of a ballgame regardless of the score.

At first, baseball was a hitter’s game. Pitchers threw the ball in an underhanded motion towards the plate, like tossing a horseshoe. This made hitting the ball easy for batters, so there were usually a lot of runs scored. Like cricket, a pitcher wasn’t meant to be in opposition to the batter.  The pitcher’s sole purpose was to throw the ball so the batter could hit it.

Pitchers knew to get out of the way after the ball was lobbed to the plate, but they still got hit often.  The role of pitcher was not desired because of the injuries they’d receive from high velocity baseballs hitting them.

Then, a pitcher named Tommy Bond began fighting back by throwing the ball to the plate in a sidearm motion, increasing the speed of his pitch little by little over time.

Pitchers began to develop technique and started throwing fastballs, curves, breaking balls and sliders.  Game dynamics moved further and further away from cricket as pitchers began to assume a more dominant role. Because of better pitching, those “21 aces” games were harder to come by.

Then, in 1856, a game ended with a 12-12 tie on account of darkness, and it became clear rules for the length of games needed to be standardized. A meeting was called by Alexander Cartwright, founder of the Knickerbocker Club in New York. After much debate, two opposing views created a stalemate. But in the end, the desire for more competitive defense won out. 9 innings, and 9 men on each team, became the standard for good.

What if the Game is Tied at the End of 9 Innings?

The Official Baseball Rulebook states “A regulation game consists of 9 innings, unless extended because of a tie score…” (Rule 7.01). The game continues until the tie is broken, but the home team still has the last at bat. So, if the visiting team scores during extra innings, the home team has a chance to score again to tie the game again, or win by scoring more runs.

Regular season games are played by two teams. One of the teams “visits” the other team at their home stadium. When the Kansas City Royals are scheduled to play the New York Yankees at Yankee Stadium, for example, the Royals are the visitors and the Yankees are the home team.

How Long Does it Take to Play 9 Innings?

As in other sports, there is no set time for a baseball game to be completed. A look at most box scores shows it takes an average of three hours to play 9 full innings.  But there are many different factors that can make a game longer or shorter than that.

On May 8th, 1984, the Chicago White Sox played the Milwaukee Brewers in a game that was tied in the 9th inning. The teams played until the White Sox scored the winning run in the 25th inning, after 8 hours and 6 minutes.  The final score was 7-6.

The longest 9 inning game in history, lasting 4 hours and 15 minutes, was played on July 7, 2018, between the Philadelphia Phillies and the Pittsburgh Pirates. The final score was 17-5, and the win for the Phillies gave them a tie for first place with the Atlanta Braves.

A game that has gone down in history, though not the longest, was between the New York Mets and the Atlanta Braves on July 4, 1985. The game is infamous because of all the strange occurrences which further delayed the game.

Play began an hour and a half late that night due to a rain delay, followed by another 41 minute delay in the third inning due to high water on the field. The game was tied at 8 apiece at the bottom of the ninth.  Finally, after 6 hours and 10 minutes, the Mets prevailed, scoring the winning run in the 19th inning. At 3:55 in the morning, Atlanta time, the stadium fired off their planned holiday fireworks to be seen by those fans who remained in the stands to watch.

How Did the Seventh Inning Stretch Originate?

Baseball is full of traditions, and one of those is the “Seventh Inning Stretch.” This period occurs in the middle of the 7th inning, after the visiting team has batted, and before the home team’s turn at the plate. During this time there is a slight delay in the game, giving everyone a chance to stretch and take a break. Through the stadium loudspeakers “Take Me Out to the Ballgame” is heard, a popular song written by Jack Norwich in 1899.

Like many of baseball’s traditions, the origin is shrouded in mystery. A popular theory holds that in 1910, then President William Howard Taft attended the opening day game between the Washington Senators and the Philadelphia Athletics. Taft threw out the first pitch of the game, which is another long standing tradition.

In the seventh inning, Taft stood up, and the crowd assumed he was getting up to leave, so they stood up along with him. It turned out that Taft was only stretching his legs.

There are other theories as well. During a very long inning of a game played in 1869, the entire crowd at the game stood up as one to stretch. Baseball games can become an endurance test because of their length. People in attendance spend most of that time sitting in a wooden or vinyl seat, only to stand when going to the concession stands or rising up when their team has made an exciting play.