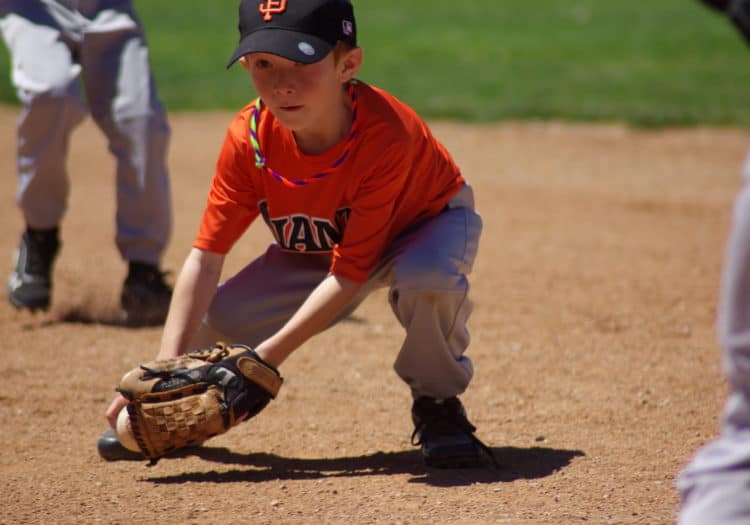 The Little League organization sets the standards for youth baseball leagues nationwide, and Little League also helps determine the level of competition for youth players. According to the organization, 9-year olds can either continue playing in a Minor League Division or, can choose to play in the more competitive Little League Major Division. What this means is that at the age of 9, it is assumed players are ready to play baseball that tests their skills more vigorously. A properly fitting baseball glove is crucial to fielding faster hit grounders and fly balls.

An important factor is that 9-year olds are still growing and parents should be aware that within a year or two their child will have grown out of the glove and will need a new one. It isn’t necessary, then, to make a major investment in a glove, but instead, find the glove best-suited for the player now. Glove features to consider should include the following.

Measuring the Hand for a Baseball Glove

There’s a general “rule of thumb” (no pun intended) for measuring a glove for the best fit. No matter whether a player will be playing in the infield or outfield, a basic measurement should be taken before deciding on a smaller or bigger sized glove.

To measure the proper glove size, all you’ll need is a flat surface and a flexible tape measure, like the kind used by tailors measuring for clothing. Place the glove hand flat on the table. Now, start the tape measure at the base of the hand and measure up the side of the index finger to the tip of the finger. Round up to the nearest inch. When you have the number, add two inches to it. So, if you measured 9 inches, you would add 2 and then fit for a glove that is 11 inches in length.

We mentioned earlier that the range of glove sized for youth players varies based on which position they’ll play most of the time on the field. At the age of 9, coaches begin to note each individual player’s abilities. Many children start to play baseball as young as 5-years old, when everyone is considered equal, and the kids learn about the field dimensions, running and hitting through drills that are fun and exciting.

However, by the time they reach 9 years of age, throwing, running, hitting and fielding challenges are greater. Kids this age will be asked to do more than they did a year earlier, and within another two years, it will be clear what their strengths are, and also those areas they’ll need to improve. Coaches will take note of a player who has a great throwing arm and places him in the outfield to test his throw to home plate. In this case, a glove slightly larger than the length of the hand from base to finger is advisable.

Alternatively, your child may be able to move quickly left to right and at the same time be able to field ground balls hit with some speed on them. A coach notes the player’s reaction time and, in his experience, will want to place him at shortstop or second base. Or, the player may move quickly and also throw with speed and accuracy to first base. Here, the coach may try him out at third base.

In my coaching experience, I do exactly that. I can see a set of inherent abilities I will want to develop more in each player. I look at each player individually and set up my infield and outfield based on the strengths of each one. Over time, I’ll note other strengths and will switch players around on the field. For example, I will often put a left fielder at third base and test his ability to field and throw to first, taking his reaction time into account. Or, I will take a third baseman and put him in center field, and intentionally hit fly balls to his left and right, behind and in front of him and see how he does.

What is the Best Material for a 9-Year Olds’ Baseball Glove?

There are gloves on the market today that are ready to use as soon as they are taken out of the box. This is not a recommendation, but only a sharing of information, but Mizuno now makes baseball gloves that are made of soft pigskin leather which require little or no breaking in time before they’re ready to go. Leather is the favored material of baseball gloves, even after the 167 years that baseball has been played. The Mizuno baseball glove product is a competitively priced glove that is made from pigskin leather, the softest leather that can be used in a glove. 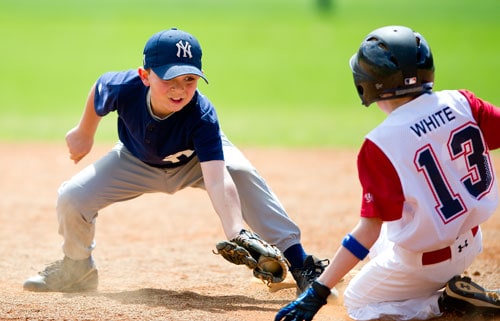 Another advantage to leather is that once the ball is firmly in the glove’s pocket, it stays there. In a synthetic leather glove, the ball is never as snug, nor as reliable. A player who catches a fly ball often has to compensate for the synthetic material of his glove and need to make sure the ball stays in the pocket.

Lastly, synthetic gloves simply aren’t as flexible as leather gloves. Players should be able to routinely open and close their baseball gloves with little to no effort. As baseball becomes more challenging and the drills coaches give 9-year olds makes players do more with their feet, arms and hands, players should be able to give 100% focus on the drill and not on whether their baseball glove is cooperating with them.

What kind of Drills do 9-Year Olds Perform?

I set aside time in each practice to stand at the plate with a fungo bat and hit baseballs to each position on the field. All players are in position and I’ll first hit to the infield, where they will not only field grounders and short popups, but they’ll also have to throw to a cutoff player to simulate runners on base.

For example, I’ll hit a ground ball to the shortstop. He will set up in a crouched position, place his glove on the ground, scoop the ball into his glove pocket, then stand and throw to second base. The second baseman will be covering the base.  He’ll step on the bag then throw the ball to the first baseman. This important drill tests players’ abilities to make a double play. I develop these skills at the 9-year old level because, by the time they are 12 or 13, they’ll need to be able to do this as if it’s second nature.

There is a lot of moment involved in fielding and throwing a ball, and the last thing I want my players to worry about is if their glove is going to slip off their hand because it’s too loose, or that it doesn’t hold the ball in the pocket of the glove because the glove’s material is too slippery.

Gloves are extremely important, and the less players have to deal with them, the better. Gloves serve as an extension of the hand and serve the critical purpose of getting the baseball, either as a grounder, a fly into the outfield or as a throw being caught by another player. Although kids this age will grow out of their gloves, parents can economize by going for a glove that’s flexible and can be molded to their child’s hand without it being expensive.