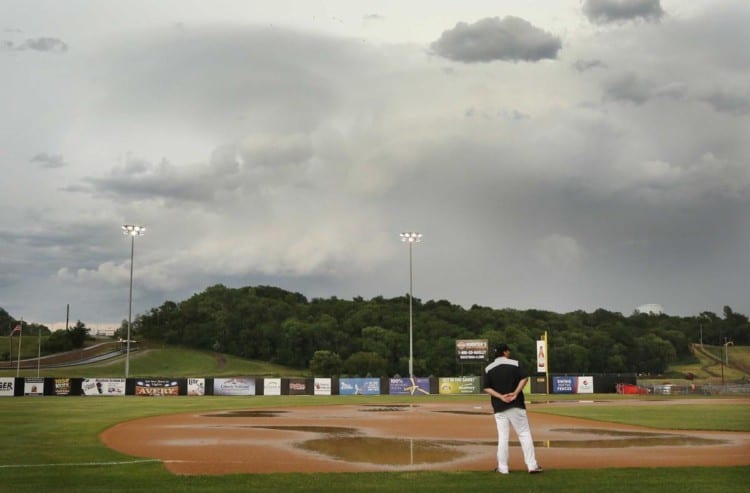 Recently, I was at a Major League Baseball game and it started to lightly rain yet the game went on, shortly after it started pouring and the game was called due to rain

So why can’t you play baseball in the rain? When it rains, also known as “Rainout”, players run the risk of slipping hazards, it distracts the players and compromises their performance, and the baseball itself absorbs water and effects the weight and friction of the ball.

Any respective sports enthusiast knows a majority of sports, say football, seldom gets called due to weather, but yet baseball does. However, rainout suspensions serve a very important purpose.

General Rules for Baseball Regarding Rain

In baseball, a rainout can lead to several outcomes for a game, including suspension or delays in the game if the weather is poor before the game even starts and cancellation if the weather is deemed to be a danger to both the players and spectators.

These rules not only apply to rain, but all types of inclement weather that may reconsidered hazardous for players and spectators, such as high winds, thunderstorms or heavy lighting, dense fog, snow, and so on.

Flooding of the field is also taken into account during any type of rain and the game will be called if it’s considered too wet by officials.

If you’ve ever played baseball, I’m sure you’re fully aware of the layout of the baseball diamond. Dirt, sand, and grass aren’t exactly the best footing when conditions aren’t optimal for players. For the sake of brevity, here are a few of the major hazards players face in the rain.

Every single aspect of the field is drastically altered when damp. If you’ve ever tried to run in wet sand or in a mud pit, you know that the risk of injury increases ten fold due to the fact that sand and dirt are porous and absorb water, becoming sticky and heavy while creating the ideal traps for twisting an ankle, breaking toes, or falling face first into the ground.

Grass isn’t as detrimental as the aforementioned surfaces, this is why the infield is covered with specialized tarps and the outfield isn’t, but think about if you’ve ever tried to run in the grass when it rains.

Friction becomes non-existent and in a game of speed, you need to have solid footing while running the outfield or you may find yourself in big trouble.

Rain and Its Constituents

Rain often isn’t just rain itself, it comes chock full of clouds, wind, or with thunder and lightening. Baseball is tricky enough as is, but in taking environmental factors into account, think about how detrimental those conditions are.

Throwing a baseball in high winds can effect the trajectory of the ball and change it’s direction and relative velocity, not only is this an unfair advantage for the offensive team, a 90 mile per hour fast ball going rouge in mid-air poses a serious risk to everyone in the vicinity.

If its overcast or the sky is littered with dark clouds, it’s basically like wearing sunglasses and visibility is greatly reduced, which can also be extremely dangerous due to the aforementioned risks of a rouge ball traveling at a high velocity.

If you can’t see where the ball is going, how can you expect precision pitches or for the batter to be able to see what they’re hitting?

Oddly enough, even the equipment in baseball is drastically affected by rain as well. Ball handling becomes much more difficult for players for a few reasons.

Water can make a ball incredibly slippery due to the surface area of the ball. Pitchers can’t throw to the best of their abilities because the ball has to leave their hands at a precise angle and points of impact change when the ball doesn’t leave the pitchers hand at the exact moment they intend for it.

The ball itself becomes heavier and takes a physical toll on the players in the field due to the added weight, requiring much more physical exertion to throw the ball the same distance as they would a dry ball, increasing the risk of shoulder injuries or fatiguing them much faster than usual.

When a wet ball rolls through wet grass, it won’t roll nearly as far as it would on a clear day, which is an unfair advantage for the batters and runners.

Even the batter will find themselves struggling more, a wet bat is much harder to maintain a firm grip on and the barrel becomes slippery, increasing the probability of the ball glancing off the bat and making accurate hits next to impossible.

Who Reserves the Right to Call a Game for rain?

Before the game starts prior to the first inning, the home team reserves the right to call a game on account of a rainout and if the game should be delayed to wait it out, or if the game should be postponed to a later date, which is more likely in the beginning of a season as opposed to nearer the end of the season due to less availability.

Once the game is underway, the responsibility for calling the game shifts from the home team to the umpires on the field to determine if the conditions are safe and playable for both teams based on the criteria of the league they’re playing in.

For example, if the game is regulation and past the fifth inning with the visiting team having batted without a tie, officials reserve the right to declare the game a victory in favor of the team who’s up in runs by this point by declaring a rain shortened game.

Are There Rain Shortened Games in the Play Offs or World Series Games?

Long answer short, no there are no rain shorted games in the post season. In a ruling by the office of commissioners for baseball, it has been determined that high stakes games such as these have to played through to utter completion in order for it to count towards official standings.

If a game is called due to rain or inclement weather during the post season games past the fifth inning, the called game will resume from the point it was concluded at on a later date when conditions are favorable.

Do the Same Rainout Rules Apply for Little League or High School Baseball?

Although no two conditions are similar in baseball, there are some differences and similarities between different leagues of baseball.

The most strictly enforced rain out rules for non MLB leagues involve lightning more so the rain.

Due to a majority of state laws involving minors, if lightning is spotted throughout the duration of the game, players will be ushered off the field by adults for approximately 30 minutes after the last lighting has been seen.

Players are kept in the clubhouses or dugouts until officials and coaches come to a consensus to either resume or cancel the game altogether if it seems as if the weather won’t clear up within a reasonable expectation of time. Rainouts are less common outside of the MLB, but they do happen on occasion.

Adults, usually coaches and umpires will carefully inspect the areas where players will be and determine if conditions are unsafe and pose a hazard to the teams. If certain areas of the field are safe to play on, but others are not, the game will be put on hold until it’s decided the areas the players will be using are safe to play on, but if the game is called and there is no tie past the fourth inning, the game will be called in favor of the team up in runs even if the entirety of the game as reached completion.